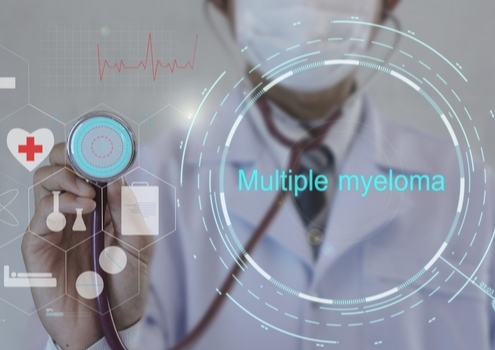 Shares of Karyopharm Therapeutics soared Monday after the company posted positive Phase III results in multiple myeloma and announced it is planning a regulatory submission in the second quarter of this year for its combination of Xpovio, Velcade and Dexamethasone.

Newton, Mass.-based Karyopharm said the once-per-week triple combination of Xpovio (selinexor), Takeda’s Velcade (bortezomib) and low-dose Dexamethasone significantly increase progression-free survival (PFS) results in comparison to standard twice-weekly Velcade plus low-dose dexamethasone in patients with multiple myeloma who have received one to three prior lines of therapy. Karyopharm noted its once-per-week therapy yielded a 47% increase in median PFS in comparison to the standard-of-care treatment. The median PFS in the triple-combination arm was 13.93 months compared to 9.46 months in the standard-of-care arm, representing a 4.47-month increase in median PFS.

Karyopharm said it will present full top-line data from the Phase III BOSTON study at an upcoming medical conference. The company noted there were no new safety signals and no imbalance in deaths between the two study arms.

Sharon Shacham, president and chief scientific officer at Karyopharm, said the BOSTON study is the first randomized Phase III trial to demonstrate clinically and statistically significant activity of once-weekly Xpovio in combination with a current standard of care treatment in patients with myeloma after one to three prior therapies. Pointing to the 47% PFS data, Shacham said the company believes this represents “an important improvement in the treatment of patients with relapsed or refractory multiple myeloma.”

“We plan to submit the full data set for presentations at upcoming medical meetings to share the results with the medical community. We also intend to submit these data as quickly as possible to the U.S. Food and Drug Administration (FDA) as part of a supplemental New Drug Application seeking to expand the approved indication for Xpovio into second-line treatment for patients with relapsed or refractory multiple myeloma,” she said in a statement.

If approved, the triple-combination therapy would be the first and only FDA-approved combination drug regimen that includes once-weekly Velcade therapy for relapsed myeloma, Shacham added.

Karyopharm’s Xpovio is a first-in-class, oral Selective Inhibitor of Nuclear Export (SINE) compound. Xpovio was initially greenlit by the FDA last year in combination with dexamethasone for the treatment of patients with relapsed refractory multiple myeloma who have received at least three prior therapies and whose disease is refractory to at least one proteasome inhibitor, one immunomodulatory agent and one anti-CD38 monoclonal antibody. The approval process had something of a rocky road after FDA briefing materials for an advisory committee meeting raised concerns over the drug’s safety profile. Karyopharm submitted additional data it had and the drug was approved.

Multiple myeloma is the second most common blood cancer in the U.S. with more than 32,000 new cases each year and over 130,000 patients living with the disease. Despite recent therapeutic advances, there is currently no cure and most patients’ disease will typically progress following treatment with currently available therapies.

Karyopharm is also anticipating additional indications for Xpovio. A supplemental New Drug Application was recently submitted to the FDA seeking accelerated approval for Xpovio as a new treatment for patients with relapsed or refractory diffuse large B-cell lymphoma (DLBCL). Xpovio has received Fast Track and Orphan designation from the FDA for this patient population.