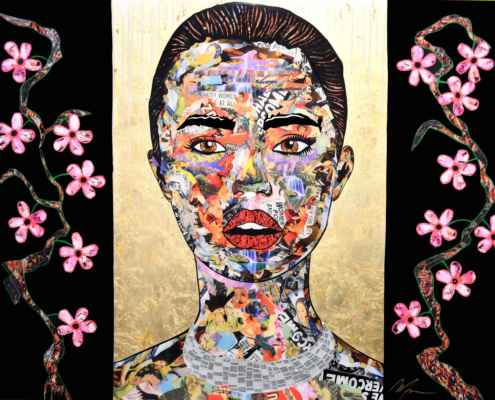 Klick Health to kick off The Shoebox Project for Women’s holiday campaign with 4-story art installation on headquarters
Toronto-based charity The Shoebox Project for Women is partnering with Klick Health (its title sponsor) to launch a four-story art installation by Canadian artist Daniel Mazzone to put a spotlight on local women experiencing homelessness.
The piece, called “Maria,” will be unveiled on October 13, 2021 at 10 a.m. EST and will stay up until January 1, 2022. The large-scale portrait will be hung on the front of Klick Health’s headquarters at 175 Bloor Street East, Toronto (North Tower) – only a few blocks away from the shelter the artist’s mother lived in many years ago, when she experienced homelessness.
The installation will kick off The Shoebox Project for Women’s holiday fundraising campaign. The organization collects gift-filled shoeboxes and messages of support, and distributes them to local women impacted by homelessness in Canada, the U.S., and the U.K.
“Maria” will feature a QR code that drives passersby to The Shoebox Project website for more information and/or to make donations.

More than 1.5 million women in Canada live in poverty, including 30% of single mothers and 34% of First Nations women and girls. The COVID-19 pandemic has had an unprecedented impact on vulnerable women and girls throughout Canada. A staggering 6,000+ women and children sleep in shelters on any given night because it isn’t safe at home. A recent Statistics Canada survey about COVID-19 found that one in 10 women is very or extremely concerned about the possibility of violence in the home. And programs and services are seeing a surge in gender-based violence and economic problems and they’re struggling to meet women’s needs.

For women who have been displaced from their homes and are estranged from their families, the holiday season can be particularly challenging. A gift from The Shoebox Project is a powerful and rare reminder for a woman she has not been forgotten and that she remains a valued and respected member of her community.

Interviews and one-on-one guided tours of the installation by Daniel Mazzone are available upon request. 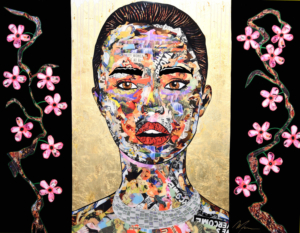 Described as the ‘The Next Andy Warhol’, Canadian artist Daniel Mazzone was born and raised in Toronto. After his parents separated, his mother lived in a women’s shelter. At the age of 15, Mazzone experienced homelessness himself — later reflecting on the struggles his mother faced and challenging stereotypes associated with women experiencing homelessness. Over the years, his work has been exhibited in Toronto at the Canadian Heritage Art Company, Hazelton Fine Art Gallery, and Pearson International Airport; in New York City at the Carriage House Arts Center; and in Miami at Art Basel, the W Hotel and 1 Hotel. Notable collectors of Mazzone’s art include the Tanenbaum family, CEO of Audemars Piguet François-Henry Bennahmias, owner of the Tampa Bay Rays Randy Frankel, and former Toronto Blue Jays Marcus Stroman and José Bautista. Mazzone is returning to Art Basel Miami Beach at 1 Hotel South Beach on December 1, 2021.

The Shoebox Project for Women is a national registered charity that is dedicated to sharing empathy, kindness and compassion with local women impacted by homelessness through the collection and distribution of thoughtfully curated, gift-filled Shoeboxes and messages of support. Over the past 10 years, the Toronto-based charity has distributed over 240,000 Shoeboxes across Canada, the USA, and the UK, and an additional $1.2 million worth of gift cards and essential products directly to local women and gender-diverse people accessing over 510 shelters and community agencies.

Klick Health is the world’s largest independent healthcare marketing and commercialization partner. Headquartered in Toronto, the company was established in 1997 and has consistently been named a Best Managed Company and Great Place to Work. In 2020, Klick was recognized with 14 Best Workplace awards, including Best Workplaces for Giving Back, Best Workplaces for Women, Best Workplaces for Inclusion, and Most Admired Corporate Cultures. This project will mark Klick’s first as a title sponsor of The Shoebox Project following five years of supporting the charity through both monetary and Shoebox donations.