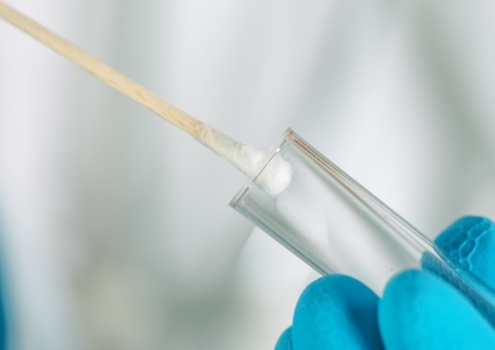 Weeks after Mammoth Biosciences announced its CRISPR-based diagnostics test for COVID-19 had a high degree of specificity even for asymptomatic patients, the Bay Area-based company struck a deal with GlaxoSmithKline to accelerate development of the test in hopes of getting them in consumer hands as soon as possible.

“We validated our method using contrived reference samples and clinical samples from patients in the United States, including 36 patients with COVID-19 infection and 42 patients with other viral respiratory infections. Our CRISPR-based DETECTR assay provides a visual and faster alternative to the U.S. Centers for Disease Control and Prevention SARS-CoV-2 real-time RT-PCR assay, with 95% positive predictive agreement and 100% negative predictive agreement,” the authors wrote in the paper called “CRISPR–Cas12-based detection of SARS-CoV-2.”

Trevor Martin, Mammoth’s chief executive officer, said the DETECTR test is easy to use and provides accurate results within 20 minutes. Unlike some COVID-19 point-of-care tests that are on the market, the DETECTR test does not require a sample from the deep recesses of the nasal cavity, but can be performed with a frontal nasal swab. Once the swab has been taken, the CRISP system programmed into the diagnostic tool provides the results in an easy-to-read manner. In an interview with BioSpace, Martin likened the device’s ease-of-use to an over-the-counter pregnancy test.

Through this morning’s announced collaboration with GlaxoSmithKline Consumer Healthcare, the two companies hope to begin seeking Emergency Use Authorization from the U.S. Food and Drug Administration for the tool by the end of the year. If it passes muster, the device would first be available in a clinical setting and then later, it could be sold directly to consumers in a corner drugstore. By the time it is directly available to consumers, Martin said, the diagnostics kit could be programmed for other indications beyond COVID-19, including Zika virus or Ebola. It could also be programmed for more mundane illnesses, such as strep throat, Martin speculated.

“This is something that can increase our own access to timely information about our health,” Martin said. “COVID-19 is, of course, a key focus right now, but as a society what we need is a foundational shift in diagnostics – a scalable means to widely address disease detection. With a CRISPR-based diagnostic we can achieve a rapid and true point of need test without compromising the accuracy of molecular testing for all types of infectious diseases.”

If EUA is granted, Martin said the expertise of GSK Consumer Healthcare will come in handy when it comes to scaling up the necessary manufacturing and distribution of the product. Since its 2018 launch, Mammoth has been focused on using the power of CRISPR as a diagnostics tool. When the company launched two years ago, Martin, a co-founder, said he never anticipated a global pandemic would become the focus of his company’s efforts, but noted that they are excited about the possibility of the company’s device playing a role in helping stop the spread of the disease that has claimed the lives of more than 90,000 people in the United States.

Brian McNamara, CEO of GSK Consumer Healthcare, said in a statement that his company is excited about working with Mammoth to bring this diagnostic tool to the public.

“We look forward to bringing the power of testing out of the lab and into people’s homes,” McNamara said.

Mammoth and GSK did not disclose the financial details of their new partnership. For Mammoth, the deal came five months after the company secured $45 million in a Series B financing round intended to be used to support the development of its diagnostic programs.