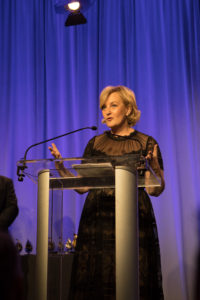 LIVINGSTON, N.J., April 20, 2018 – Med Ad News – the leading pharmaceutical business and marketing publication – reveals the winners for the 2018 Manny Awards, celebrating the best in the healthcare communications industry. The black-tie gala affair was held last night at Pier Sixty in New York City with 500-plus people in attendance. Nineteen Manny statues were awarded throughout the evening to healthcare agencies achieving excellence in various categories.

Med Ad News selected Sharon Callahan as the 2018 Industry Person of the Year. Callahan is CEO of TBWA\WorldHealth, a global agency network formed during April 2016 when Omnicom Health Group announced the combination of two of its healthcare agency icons ­– LLNS and Corbett ­– under the TBWA\WorldHealth brand. Callahan additionally serves as Chief Client Officer of Omnicom Health Group, helping clients access Omnicom’s deep healthcare talent and developing engaging innovative approaches for teamwork to maximize results for global brands. She built her career at Omnicom as Executive VP and Director of DAS Healthcare and CEO of LLNS (now TBWA\WorldHealth New York). Before her 10 years at Omnicom, Callahan was Chief Digital Strategist at Grey Healthcare Group and President of the interactive agency Summit Grey, born out of The Summit Group, a company she co-founded. Previously, she honed her talents at Medsite.com and SCP Communications.

In both 1997 and 2005, Callahan served as President of the Healthcare Businesswomen’s Association (HBA), the industry’s largest professional organization. Sharon currently sits on the boards of the HBA Metro Chapter, the Arthritis Foundation, Women Against Alzheimer’s, the 4A’s Government Relations Committee, and the LGBTQ Victory Fund. In June 2014, the Women’s Venture Fund recognized Sharon with its “Highest Leaf Award” for her strong business leadership and substantial contributions to the advertising and healthcare industries.

For the second year in a row, Area 23 has been chosen as the Category I Agency of the Year recipient. Category I agencies generate yearly revenue of more than $50 million. Heading into 2017, Area 23 set its sights on a goal of reaching the $100 million annual revenue mark by 2020. Now in 2018, the agency already has achieved that goal. 2017 was especially noteworthy for Area 23 for major product launches, with five agency clients reaching their all-important PDUFA milestones. Area 23 closed out 2017 with 12 agency-of-record new business wins – representing about $45 million in new revenue – seven of which were DTC. As a member of the FCB Health Network, Area 23 won four additional Manny Awards: Most Creative Agency, Most Admired Agency, Best Point-of-Care Campaign (Lartruvo), and Best Interactive Physician Campaign (The Trafficking Exam).

For the second time in three years, Concentric Health Experience is the Category II Agency of the Year winner (for advertising firms with annual revenue between $25 million and $50 million). Concentric grew by 40 percent versus the previous year, with the primary driver in 2017 attributed to growth within existing client engagements. In terms of new business, Concentric won nearly 70 percent of its pitches. Together, this performance marks a CAGR of 35 percent over the past five years. CHX also took home a statue representing the Best Consumer Campaign for the New York-based agency’s “Silence Sucks” promotional work.

For healthcare communications shops that produce under $25 million in annual revenue, the 2018 Category III Agency of the Year recipient is Calcium, one year after the agency was a finalist in the same category. Calcium ended 2017 with 50 percent revenue growth. That success was created through a combination of organic growth from existing clients as well as several key new business wins. Calcium expanded its office space in Philadelphia and New York, and hired 30 new employees. 2018 got off to an impressive start as the agency won its first two pitches.

This year’s Manny winner for the Vision Award is W2O Group. The Center for Social Commerce was established as a first-of-its-kind partnership between W2O Group and Syracuse University’s S. I. Newhouse School of Public Communications. The CSC was made possible by W2O Group founder and CEO Jim Weiss, a Syracuse alumnus. Through interactive programming and training opportunities, the CSC helps bridge the gap between communications curriculums and industry realities, while creating a laboratory for new ideas and innovation for clients, staff, and the profession.

The 2018 Manny recipient in the Best Launch Campaign category is Harrison and Star for Truvada PrEP. Harrison and Star’s campaign for Truvada PrEP truly has the potential to change behaviors, as physicians immediately think of their own patients who might contract HIV that very night if they do not try to intercede. Gilead is holding it up as the new standard of advertising excellence for all future launches. And one of the leading and most vocal KOLs in the HIV community saw the campaign and sent a note to Gilead, telling them how impressed he was that a pharma ad had so perfectly captured the right, balanced message for PrEP and would clearly communicate to his colleagues which of their patients they should think about for and how they can intercede for good.

Harrison and Star hosted the post-ceremony cocktail hour and set up a recording booth where attendees were given the opportunity to share stories about their careers. Participants were asked a variety of questions, such as “What is the most memorable product launch of your career, and what made it special?”

The Med Ad News “MedAdvocate” jury returned for a third year to help determine the winning Manny Award creative campaigns. The panel gathered at a roundtable discussion to review and discuss the creative award finalist campaigns previously determined via online voting by agency executives and chief creative officers. Each MedAdvocate was assigned specific campaigns and tasked to initiate meaningful dialog amongst the jurors. The MedAdvocates were chosen based on their creative expertise and widely recognized performance within the healthcare communications industry. The team scored every finalist campaign using a point system that, combined with the popular vote conducted online, arrived at the eventual winners that were highlighted last evening.

For the Best Professional Campaign, FCB Health has been recognized as the winner for the agency’s work on Stiolto Respimat, which wanted to shine a light on the hidden story of COPD. This honest, unique depiction of the real burden of COPD gave physicians true empathy for their patients.

CDM New York won the Manny statue in the Best Nonbranded Campaign category for “Rethink Osteoporosis.” Using the body as a canvas, CDM painted women to expose the vulnerability of a postmenopausal woman’s bones. The agency aimed to challenge perceptions of the osteoporosis patient type and to emphasize the serious nature of an osteoporotic fracture.

For Best Interactive Patient Campaign, McCann Health New York has been voted on by its peers as having the award category’s best work for “Laugh it Up.” The Laugh It Up campaign was based on a little-known medical fact that laughing can work just as well as traditional treatments to help people with cystic fibrosis breathe.

The Best Medical Device Campaign recipient is GSW for Suavita. GSW’s client Hollister believes every person living with a stoma deserves to live with dignity. Using the actual Suavita pouch combined with bird and butterfly wings, this campaign implies an elevation in care that also symbolizes freedom and reconnecting with life.

For Best Self Promotion among the healthcare communications agencies, McCann Torre Lazur is the category winner for “Kill The Cliché.” McCann Torre Lazur went on a mission to see just how many unoriginal ideas were really out there. Using AdPharm the agency searched, organized, and categorized. Then, armed with the knowledge of these unoriginal ideas, MTL created a warning to all creatives to help them avoid the pitfalls of the predictable.

McCann Managed Markets is the 2018 Manny Award winner for Best Managed Markets Campaign for the National Diabetes Volunteer Leadership Council. McCann Managed Markets provided the NDVLC with a campaign targeting employer/groups and benefit consultants with emotional and functional content to help facilitate the conversation and urging them to shape their pharmacy benefit design with insulin affordability in mind.

With every healthcare agency in the Med Ad News community extending their assistance via philanthropic efforts, GSW garnered the most votes for Best Philanthropic Campaign with “This Little Piggy.” GSW was saddened to hear so many stories of uncorrected clubfoot leading to terrible consequences beyond just the inability to walk and run. The agency wanted potential donors to know that for little money, they could change these troubled stories. The “This Little Piggy” nursery rhyme is well known worldwide as a playful interaction between mom and baby with baby’s little toes. To dramatize what clubfoot often leads to, GSW’s version twists everything in a much darker direction.

About the Manny Awards
For more than 25 years, the Med Ad News Manny Awards have paid tribute to the creative work of agencies serving the healthcare market, their people, and their contributions to the industry. Each year at this gala awards ceremony, Med Ad News and agency professionals come together to celebrate creative excellence in pharmaceutical and medical device advertising and to acknowledge those making significant contributions to healthcare communications. On this special evening, more than 500 industry peers are anticipated to join Med Ad News in honoring winners in a range of award categories.