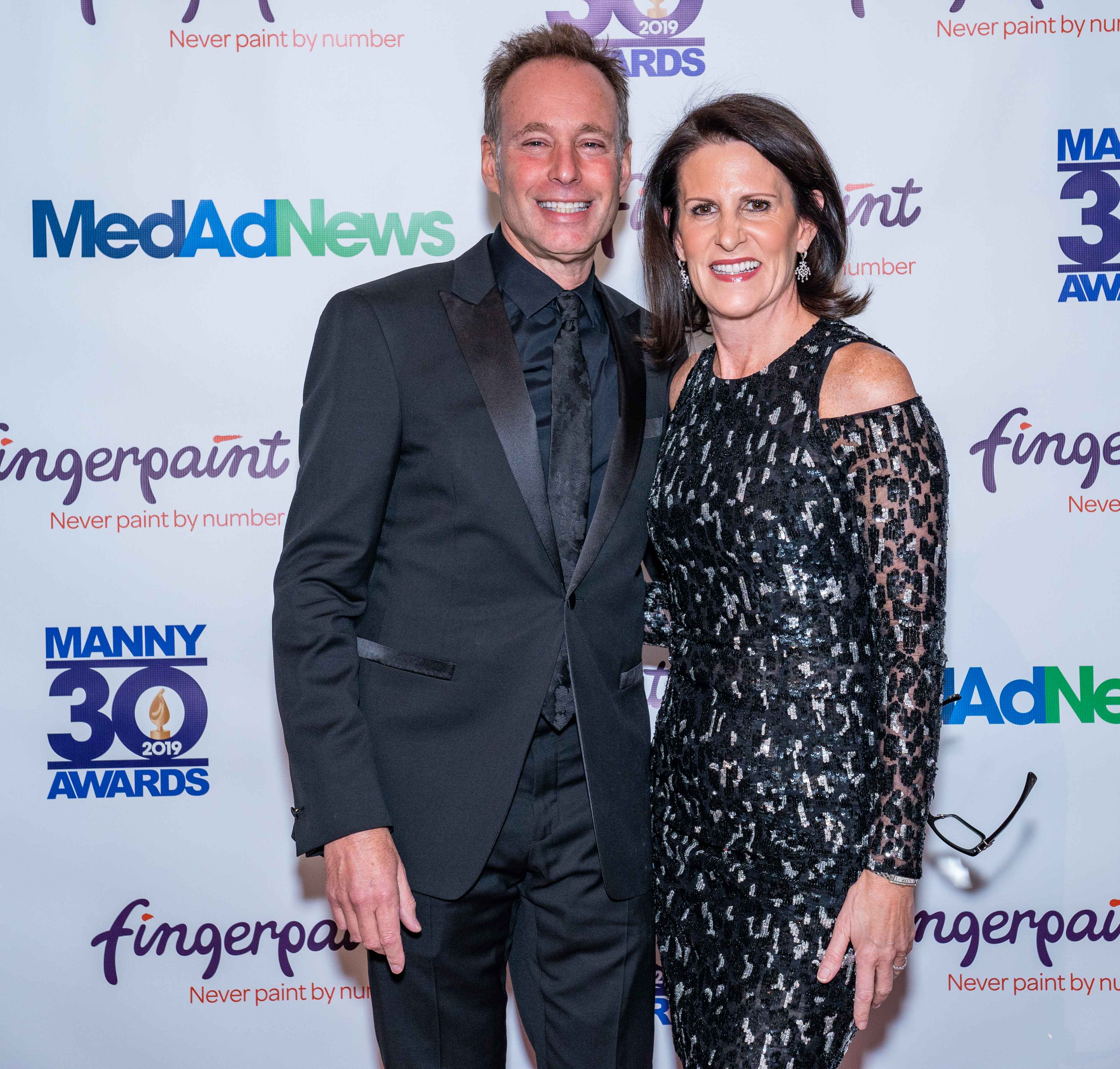 LIVINGSTON, N.J., April 19, 2019 – Med Ad News – the leading pharmaceutical business and marketing publication – unveils the winners of the 2019 Manny Awards, celebrating the best in the healthcare communications industry. The 30th anniversary of the black-tie gala event took place last night at Pier Sixty in New York City with 500-plus people in attendance. Manny Award statues were presented throughout the evening to healthcare agencies achieving excellence in 30 categories. 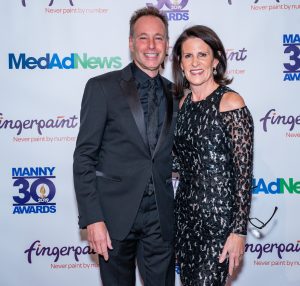 The Med Ad News 2019 Industry Persons of the Year award was presented to Steven Michaelson and Judy Capano of Calcium. Steven Michaelson has spent over 35 years in the advertising industry, more than 25 of them in pharmaceuticals. Michaelson gained industry-wide recognition as the Founder and CEO of Wishbone, a highly successful and unique start-up that thrived for 13 years and was awarded Med Ad News Agency of the Year in 2009. Wishbone was eventually acquired by Rosetta and then by Publicis. Michaelson and his wife and partner Capano would go on to launch Calcium in 2012, pulling together some of the original Wishbone partners to help guide and run the start-up agency. In 2014, The Star Group acquired Vox Medica and, on a parallel track, Calcium NYC, merging them together with their own healthcare agency, Star Life Sciences. This new entity entered the market as Calcium USA.

During December 2015, Michaelson and Capano purchased Calcium and all of the agency assets. As CEO, Michaelson has been running the agency since August 2015. Calcium was recognized as Agency of the Year – Category III by Med Ad News during 2018.

Capano started her agency career as Director of Client Services at Harrison and Star. She then moved to the McCann healthcare network, where she held an important Global Operations role – charged with leading and building the McCann global network to more than 50 offices. Her latest career endeavors include leading Wishbone (as Managing Partner and Chief Strategic Officer) to exponential growth and the eventual acquisition by Rosetta and then co-founding Calcium, as Managing Partner and Chief Operating Officer. 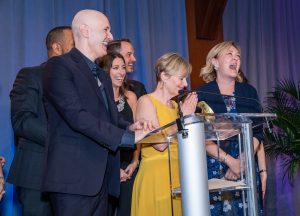 TBWA\WorldHealth: Agency of the Year Category I

TBWA\WorldHealth was selected as the 2019 Category I Agency of the Year recipient. Category I agencies generate annual revenue of more than $50 million. Since launching in 2016, TBWA\WorldHealth has emerged as a disruptive force in healthcare advertising. TBWA\WorldHealth achieved an unprecedented 100% client retention, 10 new business wins, 12 wins without a pitch, and 63% organic growth during 2018. The agency successfully executed 15 high-profile launches for disruptive clients and their brands. TBWA\WorldHealth’s U.S. revenue and employee count more than doubled during 2018. Last year was powered by a fierce focus on client relationships, punctuated by strong growth and global unification. 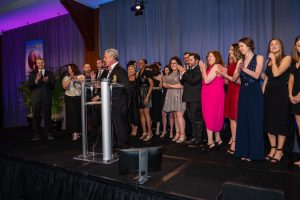 Fingerpaint was awarded the Manny statue for 2019 Category II Agency of the Year (for healthcare communications firms with annual revenue between $25 million and $50 million). 2018 marked the 10th anniversary for Fingerpaint, which made the Inc. 5000 list as one of America’s fastest-growing companies for the sixth year in a row, with revenue jumping from $31 million to $45 million. The agency reported 26 account wins. Fingerpaint’s Scottsdale office relocated to a larger space in nearby Phoenix to accommodate growth in business and headcount, and a fifth location was opened during October in Cedar Knolls, New Jersey. Fingerpaint also captured 2019 Manny Awards for Best Medical Device Campaign, Best Nonbranded Campaign, and Best Profession Web Campaign. 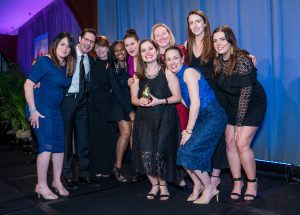 For healthcare communications agencies that produce under $25 million in annual revenue, the 2019 Category III Agency of the Year winner is Dudnyk, one year after the agency was a finalist in the same category. For Dudnyk, 2018 represented the agency’s 25th year in business. Dudnyk’s revenue grew by $3.8 million and the agency’s employee count rose by 16. Dudnyk conducted an unprecedented number of launches during 2018, with several planned launches on tap for 2019 and 2020. The agency’s “Unifying Effect” continues to drive success for specialty brands. Dudnyk continues to invest in its people through professional and personal development. 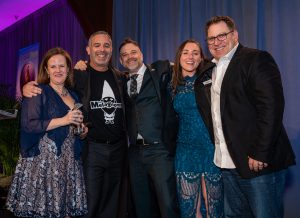 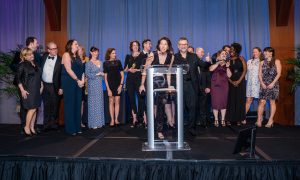 FCB Health: Network of the Year 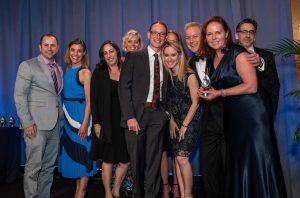 For 2019, the Med Ad News team brought back the Agency on the Rise Manny Award, which previously was presented when there was only one Agency of the Year winner for all healthcare communications firms across all revenue ranges. Brick City Greenhouse was awarded the 2019 Manny trophy for Agency on the Rise. The New Jersey-based healthcare communications agency founded in 2015 and is led by Fred Kinch, Renee Wills, and Ashley Schofield. Brick City Greenhouse was also a finalist for the 2019 Vision Award.

The Med Ad News “MedAdvocate” jury convened on March 20 for a roundtable discussion of finalist campaigns previously determined via online voting, and included selections from more than 200 eligible voters across healthcare communication agencies. In order to take a deeper dive into the finalist campaigns, a panel of experts dubbed “MedAdvocates” were each assigned specific campaigns and tasked to initiate meaningful dialog amongst the jurors. MedAdvocates were selected based on their creative expertise and widely recognized performance within the industry. Ultimately, the team scored each finalist campaign using a point system that, combined with the popular vote conducted online, arrived at the eventual winners who were crowned on April 18.

GSW – Dyskinesia Is A Jerk

Fingerpaint – UltraMIST “Take Back Your Territory”

Area 23 – The Worst Restaurant In Town

About the Manny Awards
For 30 years, the Med Ad News Manny Awards have paid tribute to the creative work of agencies serving the healthcare market, their people, and their contributions to the industry. Each year at this gala awards ceremony, Med Ad News and agency professionals come together to celebrate creative excellence in pharmaceutical and medical device advertising and to acknowledge those making significant contributions to healthcare communications. On this special evening, more than 500 industry peers join Med Ad News in honoring winners in a range of award categories.