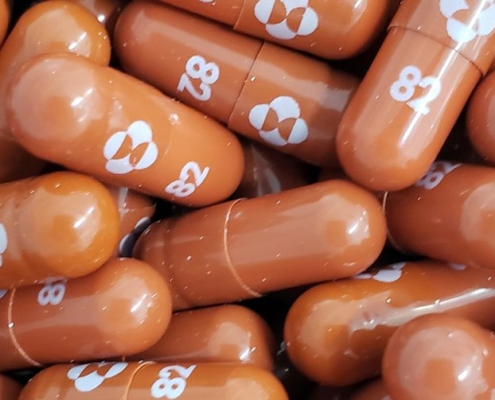 A rival oral treatment from Pfizer Inc (PFE.N), Paxlovid, is in high demand, followed by an intravenous antibody therapy made by GlaxoSmithKline (GSK.L) and Vir Biotechnology (VIR.O).

With supplies of those products tight, doctors facing a surge of cases caused by the Omicron variant are also turning to Gilead Sciences Inc’s (GILD.O) remdesivir, an antiviral that needs to be given as three daily infusions to help high-risk COVID patients avoid hospitalization.

When Merck and partner Ridgeback Biotherapeutics announced initial data late last year showing their drug, molnupiravir, halved the risk of hospitalization, it was hailed as a potential breakthrough, the first COVID treatment that could be taken at home.

So far, 265,000 courses of Paxlovid and 1.1 million courses of molnupiravir have been distributed, U.S. Department of Health and Human Services (HHS) data show. That early data also shows hundreds of thousands of courses of Merck’s drug sitting on the shelves of pharmacies and hospitals around the country.

“The Merck product is only 30% effective so we’re not dispensing it,” said Jim Mangia, president of St. John’s Well Child and Family Center, a network of public health centers in South and Central Los Angeles.

He said the center has stockpiled 200 molnupiravir courses received from the federal government, and is requesting new deliveries only of Paxlovid, which it has been prescribing.

Reuters talked to over a dozen healthcare providers in more than half a dozen countries, most of whom said they are prescribing molnupiravir on a limited basis and primarily if more effective options cannot be used or are not available.

“There is a lot of education that will need to be done over the next few weeks and months to get people up to speed,” said Eliav Barr, head of global medical affairs at Merck.

The Merck and Pfizer regimens – both taken for five days early after onset of symptoms – were heralded as an important advance, allowing at-home treatment instead of cumbersome intravenous therapies given in infusion centers or hospitals.

Dozens of generic drugmakers are lined up to produce Merck’s drug for low-income countries, but future demand is unclear.

Sales of molnupiravir, under the brand name Lagevrio, are expected to top $5 billion this year, while Pfizer’s Paxlovid is expected to rake in nearly $23 billion, according to Wall Street estimates compiled by Refinitiv.

‘CAN’T GIVE MOLNUPIRAVIR AWAY’

The U.S. government, which has spent around $2.2 billion on molnupiravir and $5.3 billion on Paxlovid, has offered about 85% of the supplies to states and sent the remaining 15% directly to community-based health centers.

“I can’t give molnupiravir away,” said Steve Moore, pharmacist and owner of Condo Pharmacy in Plattsburgh, N.Y.

“Paxlovid flies off the shelves even with drug interactions,” he said, referring to Paxlovid’s potential to interfere with the body’s ability to clear certain other medications.

Of the 80 courses of molnupiravir he received, 70 remain in stock, Moore said, while all 40 courses of Paxlovid quickly sold out. He has a waiting list for his next shipment.

Molnupiravir introduces errors into the genetic code of the coronavirus and both men and women taking it are instructed to use effective birth control due to potential safety issues. Paxlovid – a two-drug regimen that includes the older antiviral ritonavir which boosts effectiveness but can affect other medicines a patient is taking – blocks production of an enzyme called protease that the virus needs to reproduce.

Outside the United States, governments are managing molnupiravir’s use closely.

In the UK, high-risk patients can volunteer for a clinical trial to receive the Merck medication but it has not rolled out broadly. France is not using it at all, having rescinded its order for the pills.

In Italy, each region has its own rules but often a general practitioner must first refer patients to COVID health groups that can prescribe molnupiravir.

In some low-income countries, generic versions of molnupiravir are available at affordable prices.

In Bangladesh, molnupiravir is far cheaper than its rivals and is being widely used for the general population while generic Paxlovid is being prescribed by large corporate hospitals that have bought it for their patients, according to Dr. Sayedur Rahman, chairman, Department of Pharmacology, Bangabandhu Sheikh Mujib Medical University.

In India, the national health agency does not recommend molnupiravir. The drug is available in cities like Delhi and Mumbai, but its use has been narrowed to unvaccinated people with severe health problems, according to Dr. Ambrish Mithal, chairman, endocrinology and diabetes, Max HealthCare hospital in New Delhi.

In the Philippines, versions of molnupiravir are widely prescribed through hospital pharmacies. Doctors said they have seen patients improve on it within two to three days.

The U.S. National Institutes of Health (NIH) recommends Paxlovid as the top choice for at-risk patients. GSK’s sotrovimab is ranked second, followed by remdesivir, which has been used since early in the pandemic for hospitalized patients and recently received emergency authorization to help high-risk COVID patients stave off severe illness.

Drugs in the same class as Merck’s pill, known as nucleoside analogues, have been linked to birth defects in animal studies. Merck has said animal studies of its drug – for longer and at higher doses than used in humans – show that it does not cause birth defects or cancer.

Infectious disease specialist Dr. Rajesh Gandhi said his hospital, Boston’s Massachusetts General, is just beginning to use the new oral antivirals. He expects to prescribe Paxlovid for most patients who are eligible.

“As far as molnupiravir, I would use it in a person who is at high risk for severe COVID but only if other options – like Paxlovid, sotrovimab or remdesivir – are not available or cannot be given,” he said.

Last weekend, the over 400,000-member health system temporarily ran out of sotrovimab and started scaling up to use remdesivir for outpatients.

“We found one pharmacy in all of L.A. County that had Paxlovid. The rest had molnupiravir, which for us we consider not as effective,” she said.

For high-risk patients diagnosed with COVID, he said Northwell recommends that physicians hew to NIH’s recommendations. “On the very bottom is the molnupiravir.”