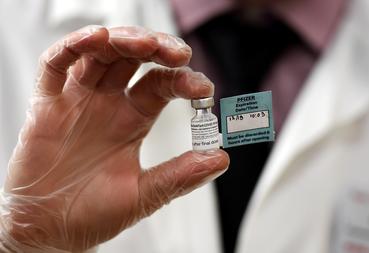 (Reuters) – Millions of COVID-19 vaccines are sitting unused in U.S. hospitals and elsewhere a week into the massive inoculation campaign, putting the government’s target for 20 million vaccinations this month in doubt.

As of Wednesday morning, only 1 million shots of the Pfizer-BioNTech COVID-19 vaccine had been given, about one-third of the first shipment sent last week. Over 9.5 million doses of vaccines, including Moderna’s, have now been sent to states, according to the U.S. Centers for Disease Control and Prevention.

While hospitals have started giving out Moderna’s vaccine, the CDC has not yet reported that data and there may be a lag in reporting shots given of both the Pfizer and Moderna vaccines.

The slow pace has barely picked up from the first week when 614,000 shots were given although nearly 2.9 million were shipped.

Hospitals said the first COVID-19 vaccinations started slowly last Monday as they navigated preparing the previously frozen shots for use, finding employees to run the vaccination clinics, and ensuring proper social distancing both before and after vaccination. Some said they did only about 100 shots the first day.

They were contending with a COVID-19 surge, as cases around the United States surpassed 18 million with 323,000 deaths. (Graphic: tmsnrt.rs/34pvUyi)

The Trump administration promised to vaccinate 20 million by the end of the year while providing little funding to achieve the goal.

That’s nine days to give out nearly 19 million shots or over 2 million people vaccinated a day including on Christmas Day.

Almost 5.9 million doses of Moderna Inc’s vaccine should go out this week and an additional 2 million doses from Pfizer and partner BioNTech.

“The commitment that we can make is to make vaccine doses available,” U.S. Operation Warp Speed chief adviser Dr. Moncef Slaoui said on a Wednesday press call. He noted the rate of people getting a shot in their arm is “slower than we thought it would be.” 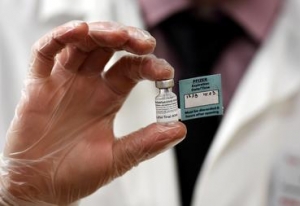 FILE PHOTO: A vial of the Pfizer vaccine against the coronavirus disease (COVID-19) used at The Reservoir nursing facility is shown in West Hartford, Connecticut, U.S., December 18, 2020. Stephen Dunn/Pool via REUTERS/File Photo

Two more vaccines may be approved in February from Johnson & Johnson Inc and AstraZeneca Plc.

The government’s goal is 100 million Pfizer and Moderna shots in arms by March 1.

Operation Warp Speed’s General Gustave Perna, who is leading the vaccine distribution effort, on Monday said that the CDC data reflects a reporting lag and that the number of vaccinations will catch up as time goes on.

The CDC said its data may also reflect a lag between vaccine dosing and state reporting. Most nursing home vaccinations only began in mass this week, and the CDC data does not specify how many doses from the first shipment were being held by states for that group.

Margaret Mary Health, a 25-bed rural hospital in Indiana, built a drive-thru vaccination clinic at a local fire station and one at a local recreation center to vaccinate healthcare workers in the surrounding counties, according to Chief Executive Officer Tim Putnam.

Putnam, who has done traffic control at the clinic’s drive-thru, said they have used about 400 of 1,100 doses received.

Some of the largest U.S. hospitals inoculated more than 1,000 people per day, having done dry runs of the vaccine delivery and rollout.

Vermont, Delaware and Idaho were among states that confirmed their states had given only thousands of doses – a fraction of those available to them – during the first week.

Jason Schwartz, assistant professor of health policy at Yale School of Public Health, described the initial tally as “discouraging” and said “the challenges of getting vaccines out as quickly as we’re able to manufacture them will only grow.”

Johnson & Johnson’s one-shot vaccine could speed deployment because it requires a conventional refrigerator and has no specialized procedures to thaw out and administer, said Claire Hannan, executive director of the Association for Immunization Managers trade group. AstraZeneca’s two dose vaccine also can be stored in a refrigerator.

“When it’s refrigerator-stable and a one-dose regimen, it can’t get any easier than that,” Hannan said.

HOSPITALS START SLOWLY BUT SPEED UP

Dr. Saul Weingart, the chief medical officer of Tufts Medical Center in Boston, said the hospital had given about 750 doses of the around 3,000 available as of Friday. It started with 100 shots per day and worked up to about 450, he said.

He said experts at the hospital modeled that giving Pfizer’s COVID-19 vaccine would take 10 minutes, about two to three times as long as a flu shot, due to the procedures needed because the vaccine is stored in a deep freeze. Patients need to socially distance before and after being given the vaccine and be monitored for allergic reactions.

The United States gives 170 million flu vaccinations each year within a few months, but for the COVID-19 pandemic, the United States must give about three times that number of shots – the Pfizer and Moderna shots are two doses – to reach most Americans by July. At its current pace, the U.S. appears to have the capacity to administer less than a third of the shots that are shipped in a given week, underscoring the gap.

A spokesperson for Houston Methodist, a hospital in Houston, Texas, said it had given 8,300 employees the vaccine as of Monday with about 7,000 doses left from the first shipment.

The University of Southern California’s Keck Medicine medical school has vaccinated over 3,000 employees and said it will take six weeks for everyone, similar to its flu vaccination schedule.

The U.S. Congress’s current coronavirus aid package sets aside more than $8 billion for vaccine distribution but is delayed.

“You can’t hire someone in December and train them up if you don’t know you can pay them in January,” Casalotti said.