(Reuters) – The number of cases of COVID-19 reported worldwide passed two million on Tuesday, according to a Reuters tally. 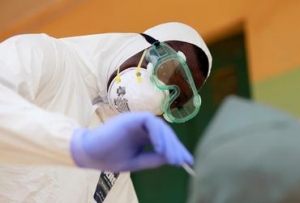 A medical worker takes a sample for COVID-19 during a community testing, as authorities race to contain the spread of coronavirus disease (COVID-19) in Abuja, Nigeria April 15, 2020. REUTERS/Afolabi Sotunde

The total reached 2,001,548 cases after the United Kingdom reported its latest figures. It took 83 days to reach the first million cases worldwide and just 14 days for the second million.

The most serious pandemic in a century has killed 131,101 people around the world, according to the tally.

The epicentre has moved from China, where the new coronavirus first emerged in December, to the United States, which now has the highest death toll.

Countries vary in how much they test for the respiratory disease, which can cause only mild symptoms, and the actual number of people infected is likely to be much higher than the number of recorded cases.