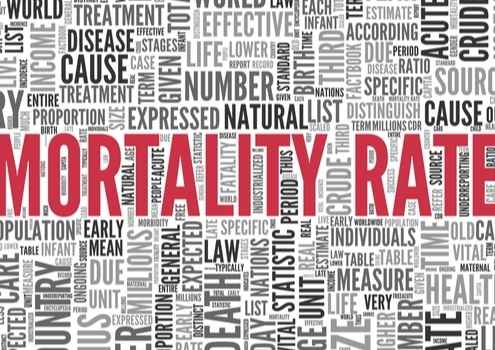 As the mortality figures for COVID-19 continued to rise, people are wondering where they will stop. The actual death toll for COVID-19 won’t be calculable for some time, but there are early indications that it may be significantly lower than calculations of deaths per confirmed cases lead one to believe.

As an article in Lancet Infectious Diseases pointed out, calculating mortality rates based on the number of deaths divided by the number of confirmed cases of infection is not representative of the actual death rate. There are two issues, the authors said. First, the denominator should be the number of people who were infected at the same time as those who died. The second issue is that many people experienced very mild symptoms and so did not seek medical treatment and were not included in the calculation.

To get to the bottom of this, the National Institutes of Health (NIH) launched a 10,000 person study in mid-April. It aims to determine how many adults in the U.S. who do not have a confirmed diagnosis of COVID-19 who have antibodies against the SARS-CoV-2 virus. The results of this serosurvey will shed light on the spread of this virus throughout the U.S. and on which populations and communities are most affected.

“An antibody test is looking back into the immune system’s history with a rear-view mirror,” said Matthew J. Memoli, M.D., M.S., principal investigator of the study and director of NIAID’s Laboratory of Infectious Diseases Clinical Studies Unit. “By analyzing an individual’s blood, we can determine if that person has encountered SARS-CoV-2 previously.”

Results from the NIH study ought to settle the controversy swirling around other similar studies.

For example, in Florida, the University of Miami Miller School of Medicine and Miami-Dade County announced completion of its second round of community testing for COVID-19 on April 24. It deployed random sampling, weighted across the county’s 32 municipal statistical areas. With 1,800 individuals completing serological tests and sharing information regarding their health, 6% have tested positive for antibodies to the SARS-CoV-2 virus. That equates to 165,000 Miami-Dade County residents – significantly more than the 10,000 cases reported in testing site data.

This indicates the actual number of infections is potentially 16.5 times higher than the numbers captured by testing sites and local hospitals. The county said it is 95% certain the true amount of infection lies between 4.4% and 7.9% of the population (or between 123,000 and 221,000 residents). Importantly, more than half of the individuals testing positive had no symptoms in the 7 to 14 days before screening.

Researchers at Stanford University tested 3,330 Santa Clara County, California residents on April 3 and 4 for antibodies to SARS-CoV-2, using a lateral flow immunoassay. Adjustments were made for participants’ zip codes, sex, and race/ethnicity and well as for test performance characteristics. The pre-publication copy of the report noted the unadjusted prevalence of antibodies to the virus in Santa Clara County was 1.5%, and the population-weighted prevalence was 2.81%. That range represents between 48,000 and 81,000 people who are infected. That’s 50- to 85-fold more than the number of confirmed cases in the county.

Similar preliminary data was released from researchers at the University of Southern California and the Los Angeles County Department of Public Health. That test used a rapid antibody blood test and confirmed those results at the Stanford University lab. Some 863 people were tested. Researchers concluded that 2.5% to 4.2% of Los Angeles County’s 10.4 million residents had been infected. At the low end, that represents 260,000 people, yet only 13,000 cases were reported through the hospitals and testing centers.

Earlier, a widely-reported study in the New England Journal of Medicine (NEJM) found that 13.7% of the 211 asymptomatic, pregnant women who delivered at New York–Presbyterian Allen Hospital and Columbia University Irving Medical Center between March 22 and April 2 tested positive for SARS-CoV-2.

Another NEJM article quantified the infection rate in Iceland as of April 4 (36 days since the first infection was confirmed there). With 6% of the population screened, researchers reported that 13.3% (1,221 of 9,199) of those tested showed positive for antibodies to SARS-CoV-2. Those tests were based on nasopharyngeal and oropharyngeal samples and analyzed using quantitative real-time polymerase-chain-reaction (qRT-PCR) assay methods. The tests were performed at either the National University Hospital of Iceland (LUH) or at deCODE Genetics.

There are two possible inferences from all of these studies.

One possibility is that academics from our leading institutions – or the tests they employed – are error-prone. Debates over methodology are ongoing, and questions swirl around error rates for tests that as yet are approved only under the FDA’s emergency use authorization.

Alternatively, these results may indicate the deadly COVID-19 pandemic – with mortality rates generally under 1% – is no more deadly than the seasonal influenza. If that is true, the near-global stay-at-home mandates could have been an overreaction.

Yet, at least initially, extreme caution was warranted. SARS-CoV-2 was a new virus and the world was unprepared. There were no diagnostics, no vaccines, and no therapeutics.

How could there be? Even though researchers have been developing influenza vaccines based on conserved sites for years, coronaviruses are not influenza. There are only seven coronaviruses that can infect people, according to the Centers for Disease Control. Four are common and cause cold-like symptoms.

The remaining three are responsible for the Middle East Respiratory Syndrome, Severe Acute Respiratory Syndrome and COVID-19. Given recent experience with MERS and SARS, extreme caution was prudent. While the percentage of infections for those pandemics were much smaller, their mortality rates were higher. The mortality rate for SARS, for example, is accepted at 11% (916 deaths and 8,422 confirmed cases). For MERS, the mortality was reported at 35%.

Against those chilling figures, documents from the World Health Organization (WHO) on April 14, 2020 indicate the crude mortality rate varies by country due to timing and testing. At that time, the crude clinical case fatality was currently over 3% but increased with age and rose to approximately 15% or higher for patients over the age of 80. The WHO also states, “Morbidity associated with COVID-19 is very high.”