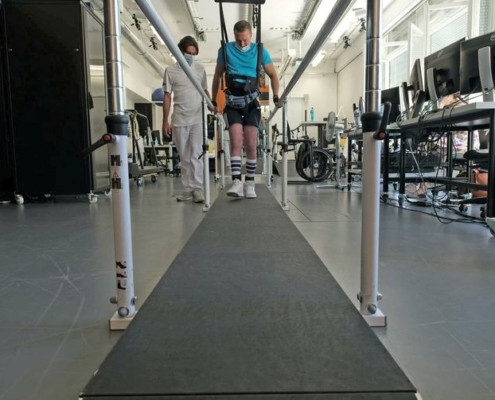 By Nancy Lapid and Ari Rabinovitch

The patients’ injuries to a region called the thoracic spine – below the neck and above the lowest part of the back – were sustained one to nine years before receiving the treatment. They were able to take their first steps within an hour after neurosurgeons first implanted prototypes of a nerve-stimulation device remotely controlled by artificial-intelligence software.

Over the next six months, the patients regained the ability to engage in the more advanced activities – walking, cycling and swimming in community settings outside of the clinic – by controlling the nerve-stimulation devices themselves using a touchscreen tablet, the researchers said.

Grégoire Courtine and Jocelyne Bloch of the Swiss Federal Institute of Technology in Lausanne led the study published in the journal Nature Medicine. They helped establish a Netherlands-based technology company called Onward Medical that is working to commercialize the system.

The company expects to launch a trial in about a year involving 70 to 100 patients, primarily in the United States, Courtine said.

There is no existing treatment to enable the spinal cord to heal itself, but researchers have pursued ways to help paralyzed people regain mobility through technology.

If this study’s early results are confirmed in larger studies, people immobilized by spinal cord injuries may someday be able to open a smartphone or talk to a smartwatch, select an activity such as “walk” or “sit,” then send a message to an implanted device that will stimulate their nerves and muscles to make the appropriate movements happen, the researchers said.

Normally to initiate movement the brain sends a message to the spinal cord, telling it to stimulate a pool of nerve cells that in turn activate the necessary muscles, Bloch said.

“It’s something we don’t even think about,” Bloch said. “It comes automatically.”

After complete spinal cord injury, messages from the brain cannot reach the nerves. Other researchers have tried to help paralyzed patients walk by stimulating nerves through the back of the spine, using broad electrical fields emitted by implanted devices originally designed to control chronic pain, Courtine said.

Courtine and Bloch and their team redesigned the devices so that electrical signals would enter the spine from the sides instead of from the back. This approach allows very specific targeting and activation of spinal cord regions, Courtine said.

They then devised artificial intelligence algorithms that instruct electrodes on the device to emit signals to stimulate, in the proper sequence, the individual nerves that control the trunk and leg muscles needed for various activities such as getting up from a chair, sitting down and walking.

The software is tailored to each patient’s anatomy, Courtine said.

When the device was implanted, patients could “immediately activate their legs and step,” Bloch said.

But because their muscles were weak from disuse, they needed help with weight-bearing, and they needed to learn how to work with the technology, the researchers said.

The researchers noted that while the patients regained the ability to perform various activities, including controlling their truck muscles, for “extensive periods,” they did not regain natural movements.

Another peer-reviewed paper by a separate research team in Israel published on Monday in the journal Advanced Science describes an experimental approach for repairing spinal cord injuries. Researchers at Tel Aviv University attempted to repair the spinal cords in injured mice using adult human cells that had been engineered to behave like embryonic stem cells, which can develop into any type of cell in the body. 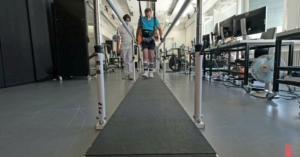 A 42-year-old patient performs training on a weight-supporting robot at Lausanne University Hospital after having received a spinal cord implant within the STIMO Bridge research, in this undated handout photo taken in Lausanne, Switzerland. He had been unable to move his legs for one year before he entered the project. NeuroRestore/Jimmy Ravier/Handout via REUTERS

The animals’ spinal cords had formed scar tissue, which has impeded any benefit of such cells in earlier studies. The researchers first allowed the stem cells to flourish in a special test tube environment, only transplanting them into the mice after the cells had matured into a small network of nerve cells and after the scar tissue had been surgically removed.

They reported achieving an 80% success rate in restoring movement and sensation to the paralyzed mice. The researchers said they aim to launch human trials within a few years.

Efforts to use such stem cells to help the spine repair itself and restore the function of organs and limbs have yet to produce an approved treatment in humans.

“There is a long way to prove that it works also in humans, but this is our goal,” said Tal Dvir, who led the team at the Sagol Center for Regenerative Biotechnology.

Reporting by Nancy Lapid in New York and Ari Rabinovitch in Jerusalem; Editing by Will Dunham and Michele Gershberg

Many babies of mRNA-vaccinated moms have antibodies at 6 months; Moderate COVID...
Scroll to top
Posting....