New research out of Harvard University may just spark interest in a new target for vaccination efforts. Evidence uncovered strongly suggests that infection with the Epstein-Barr virus is the leading cause of a debilitating disease of the brain and CNS – multiple sclerosis.

Epstein-Barr virus, a member of the herpes virus family, is one of the most common human viruses. It’s best known for causing mononucleosis, the kissing disease.

Science understands the mechanism of how MS disables. The immune system kicks into overdrive, stripping off the myelin sheath that insulates the nerve cell. This stripping results in nerve damage that disrupts the communication between the brain and the body. The symptoms vary and can range from mild to severe.

What they haven’t been able to pinpoint yet is why the immune system does this. What triggers it? It’s likely that the Epstein-Barr Virus plays a crucial role.

“The hypothesis that EBV causes MS has been investigated by our group and others for several years, but this is the first study providing compelling evidence of causality,” said Alberto Ascherio, professor of epidemiology and nutrition at Harvard Chan School and senior author of the study.

To arrive at this conclusion, the team analyzed serum samples from the world’s largest collection of its kind – the Department of Defense Serum Repository. There, scientists have been collecting and storing blood samples from every member of the U.S. military since 1985 and have more than 62 million samples from over 10 million active and reserve duty members. 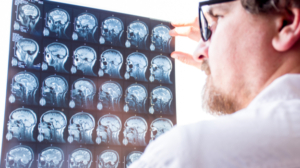 These samples are perfect for this kind of study since they are taken from usually young, healthy individuals entering the service. MS typically rears its ugly head in the 20’s and 30’s. In these blood samples, the team looked for signs of the EBV and its antibodies, along with neurofilament light chain (NfL). NfL levels in the bloodstream precede the onset of MS by a couple of years, as evidence that the neurons are under attack in the brain.

The lack of NfL levels in the samples showing EBV presence proved against reverse pathology that might suggest those with MS are more likely to be infected with EBV.

It showed clearly that infection with EBV increased the likelihood of developing MS alarmingly by more than 32-fold. Of course, many infected with EBV will never develop MS, making it clear there are other aspects to the pathogenesis of the disease.

The study also can’t explain how EBV might spark the disease. Hypotheses include the virus carrying proteins that look like myelin, which could later trigger an immune reaction against the actual myelin. Or perhaps EBV resides in B cells, transforming them into in-house assassins against the nerve cells. The disease is multifactorial, meaning there’s not likely to be one clear cause. Genetic disposition, vitamin levels and environmental exposure all likely fill a role to make the perfect storm.

EBV certainly wouldn’t be the only virus to cause brain inflammation. As we’ve all expanded our scientific knowledge through the global pandemic, we’ve learned that COVID-19 infection can also severely affect the brain, even in mild cases. A study out of Standford published last summer found unmistakable signs of inflammation and impaired circuit pathways in the brains of patients who had died of COVID-19. These findings help explain the mystery of “long COVID” in which many suffer from extended cognition and memory difficulties after infection.

While COVID-19 now has multiple vaccinations, EBV does not yet. Past efforts have been abandoned for various reasons, and the virus didn’t seem a top priority as the illness it causes is typically not severe enough to be life-threatening. However, EBV has been linked to the development of several cancers and autoimmune diseases as well.

With this new research, more R&D is likely to come down the vaccine pipeline. In fact, UMass Chan Medical School is already undertaking the job by utilizing Moderna’s mRNA against the Epstein-Barr virus. The study, Eclipse, is a Phase 1 trial in 18–30-year-old healthy adults. They’re testing out three doses against one placebo, targeting four glycoprotein antigens on the virus particle, similar to Moderna’s cytomegalovirus vaccine candidate. The first participant was dosed last week.