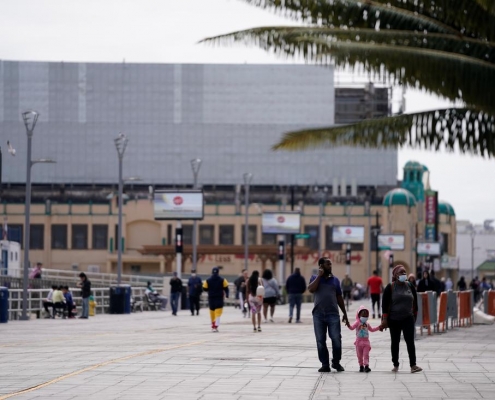 NEW YORK (Reuters) – New Jersey Governor Phil Murphy said on Wednesday he would sign an executive order requiring people to wear face coverings outdoors to prevent a resurgence of the novel coronavirus whenever social distancing is not possible.

More than 15,000 people have died from COVID-19 in New Jersey, ranking it second after neighboring New York state in the total number of deaths, according to a Reuters tally.

A Democrat, Murphy told MSNBC that requiring the public to wear masks outdoors was critical to controlling the spread of the virus in the state, an early hot spot where rates of the virus have started to creep up again.

“There’s no question that face coverings are a game-changer,” he said, acknowledging that it would be hard to enforce the order but saying the state needed to build on the progress made in its battle against the virus.

“We’ve gone through hell in New Jersey. We’ve lost over 13,000 people, we’ve brought our numbers way down. We can’t go through that hell again.”

The order, when formally announced later in the day, would be one of the most stringent coronavirus restriction on public activity in the United States. Many states require use of masks in public indoor areas and recommend they be used outside.

Murphy is taking action as infections skyrocket in many other states, including California, Florida and Texas, and health officials warn of a coming spike in the death toll from the virus, which has killed more than 131,000 Americans.

The U.S. outbreak crossed a grim milestone of over 3 million confirmed cases on Tuesday, roughly equivalent to 1% of the population, as more states reported record numbers of new infections. 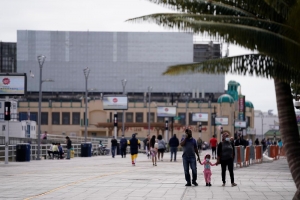 FILE PHOTO: Visitors walk and shop on the boardwalk after coronavirus disease (COVID-19) restrictions were lifted in time for the Memorial Day weekend in Atlantic City, New Jersey, U.S. May 25, 2020. REUTERS/Jessica Kourkounis

In New Jersey, some people voiced surprise that face coverings were not already mandatory.

“I figured that was already the rule – it’s confusing that it’s not clear and I try pretty hard to keep up,” said Calia Nochumson, a 42-year-old high school teacher from Maplewood, New Jersey. She said she was disappointed to see so few people wearing face coverings during a recent trip to the beach.

President Donald Trump, who owns a golf club in Bedminster, New Jersey, has eschewed the idea of wearing a face mask and has exhorted Americans to return to their daily routines since the end of mandatory lockdowns imposed in March and April.

The Republican president, seeking a second White House term in a Nov. 3 election, threatened on Wednesday to cut off federal funding to schools that fail to open in the autumn due to the coronavirus outbreak.

“The Dems think it would be bad for them politically if U.S. schools open before the November Election, but is important for the children & families. May cut off funding if not open!” Trump posted on Twitter.

It was unclear what specific aid Trump had in mind. States are responsible for primary and secondary education under the U.S. Constitution but the federal government provides some supplementary aid.

In Texas alone, the number of hospitalized patients more than doubled in just two weeks, and the number of available hospital intensive care unit beds for adults in Florida has fallen sharply in recent days.

Additional hospitalizations could strain healthcare systems in many areas, leading to an uptick in lives lost. The U.S. death toll rose by 962 on Tuesday, the biggest one-day rise since June 10, according to a Reuters tally.

The surge has forced authorities to backpedal on moves to reopen businesses, such as restaurants and bars, after mandatory lockdowns in March and April reduced economic activity to a virtual standstill and put millions of Americans out of work.

Reporting by Peter Szekely and Barbara Goldberg in New York and Doina Chiacu and Susan Heavey in Washington; Writing by Paul Simao; Editing by Howard Goller