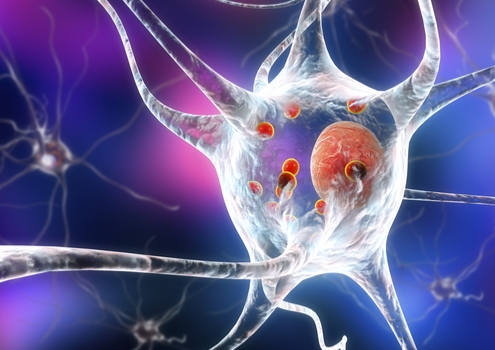 New Molecule Has the Potential of Stopping or Slowing Parkinson’s

Parkinson’s disease affects the brain’s nerve cells that produce dopamine. The symptoms include muscle rigidity, tremors, and changes in speech and gait. Researchers at the University of Helsinki have identified a molecule called BT13 that potentially can increase levels of dopamine.

By the time someone is diagnosed with Parkinson’s disease, they have typically lost 70 to 80% of their dopamine-producing cells, which assist in coordinating movement. Treatments today mask the symptoms, but there is nothing on the market that slows down the disease progression or prevents more brain cells from dying. As the levels of dopamine drop, symptoms get worse.

Their research builds on work on glial cell line-derived neurotrophic factor (GDNF), which is another molecule that targets the same receptors in the brain. In a large clinical trial funded by Parkinson’s UK, the molecule showed promise in restoring damaged cells in Parkinson’s, although the results were not completely clear.

Also, because GDNF is a very large molecule, it requires complex surgery to deliver it to the brain. BT13, on the other hand, is a small molecule, making it easier to administer.

“This molecule holds great promise. People with Parkinson’s desperately need a new treatment that can stop the condition in its tracks, instead of just masking the symptoms,” said David Dexter, deputy director of Research at Parkinson’s UK. “One of the biggest challenges for Parkinson’s research is how to get drugs past the blood-brain barrier, so the exciting discovery of BT13 has opened up a new avenue for research to explore.”

The research was published in the journal Movement Disorders.

RET is a receptor tyrosine kinase, which is a GDNF receptor. The authors write, “We characterized the ability of BT13 to activate RET in immortalized cells, to support the survival of cultured dopamine neurons, to protect cultured dopamine neurons against neurotoxin-induced cell death, to activate intracellular signaling pathways both in vitro and in vivo, and to regulate dopamine release in the mouse striatum as well as BT13’s distribution in the brain.”

At this point, BT13 showed promise worth further development.

“More research is needed to turn BT13 into a treatment to be tested in clinical trials, to see if it really could transform the lives of people living with Parkinson’s,” said Dexter.

Yulia Sidorova, the lead researcher of the study, said, “We are constantly working on improving the effectiveness of BT13. We are now testing a series of similar BT13 compounds, which were predicted by a computer program to have even better characteristics. Our ultimate goal is to progress these compounds to clinical trials in a few coming years.”

According to Parkinson’s News Today, seven to 10 million people worldwide have Parkinson’s disease. In people in their forties, it occurs in about 41 out 100,000 people, and more than 1,900 per 100,000 in people 80 and older. About 4% of people diagnosed are younger than 50. Men are 1.5 times more likely to have Parkinson’s than women.

In the U.S., the disease is thought to afflict 1 million people, with about 60,000 people newly diagnosed each year.