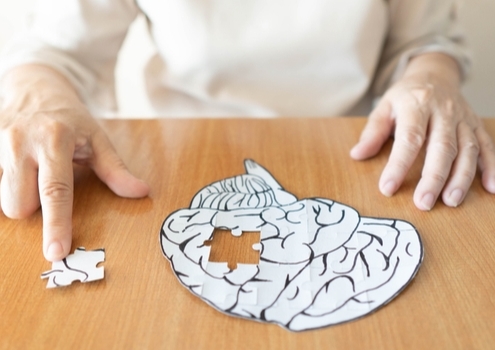 For some time, there has been speculation that glucose metabolism was associated with Alzheimer’s disease, with some researchers going so far as to call Alzheimer’s diabetes type 3. Researchers with the National Institutes of Health’s National Institute on Aging conducted the largest study so far on proteins related to Alzheimer’s and identified proteins and biological processes that regulate glucose metabolism that are associated with Alzheimer’s. The study was published in the journal Nature Medicine.

The study was part of the Accelerating Medicines Partnership for Alzheimer’s Disease (AMP-AD). The investigators assayed the levels and analyzed the expression patterns of more than 3,000 proteins in brain and cerebrospinal fluid samples collected at centers across the U.S.

“This is an example of how the collaborative, open science platform of AMP-AD is creating a pipeline of discovery for new approaches to diagnosis, treatment and prevention of Alzheimer’s disease,” said Richard J. Hodes, NIA director. “This study exemplifies how research can be accelerated when multiple research groups share their biological samples and data resources.”

The study involved analyzing protein expression patterns in more than 2,000 human brain and almost 400 cerebrospinal fluid samples taken from both healthy individuals and Alzheimer’s patients. They analyzed how the protein modules relate to Alzheimer’s and other neurodegenerative diseases. They observed changes in proteins related to glucose metabolism and an anti-inflammatory response in glial cells in brain tissues from both Alzheimer’s patients and people with documented brain pathology who were cognitively normal. This also would seem to support increasing evidence that brain inflammation is involved in the disease as well.

They also noted the importance of their findings that the glucose metabolism/glial protein module was populated with proteins already identified as genetic risk factors for Alzheimer’s.

“We’ve been studying the possible links between abnormalities in the way the brain metabolizes glucose and Alzheimer’s-related changes for a while now,” said Madhav Thambisetty, investigator and chief of the Clinical and Translational Neuroscience Section in the NIA’s Laboratory of Behavioral Neuroscience. “The latest analysis suggests that these proteins may also have potential as fluid biomarkers to detect the presence of early disease.”

Earlier research by Thambisetty and colleagues at Emory University identified a connection between problems in how the brain breaks down glucose and the amount of amyloid plaques and tangles were in the brain, as well as memory and cognitive issues.

“This large, comparative proteomic study points to massive changes across many biological processes in Alzheimer’s and offers new insights into the role of brain energy metabolism and neuroinflammation in the disease process,” said Suzana Petanceska, program director of NIA overseeing the AMP-AD Target Discovery Program. “The data and analyses from this study has already been made available to the research community and can be used as a rich source of new targets for the treatment and prevention of Alzheimer’s or serve as the foundation for developing fluid biomarkers.”

The research group was led by Erik C.B. Johnson, Nicholas T. Seyfried and Allan Levey at the Emory School of Medicine in Atlanta. The brain samples were from autopsies of participants in various Alzheimer’s research centers, including the Baltimore Longitudinal Study of Aging (BLSA), Religious Orders Study (ROS) and Memory and Aging Project (MAP), and Adult Changes in Thought (ACT) initiatives.

Samples from people with six other neurodegenerative disorders and normal controls were provided by the Emory Goizueta Alzheimer’s Disease Research Center, with data from the AD Knowledge Portal, the data repository for the AMP-AD Target Discovery Program, and other NIA projects.