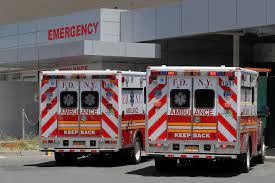 By Anurag Maan and Barbara Goldberg

The state is now reporting a total of 55,400 people died in New York from coronavirus, based on data from the Centers for Disease Control and Prevention, Hochul said in a statement.

That’s an increase of 12,000 over the 43,400 reported by Andrew Cuomo as of his last day in office before resigning in disgrace amid a sexual harassment scandal.

“We’re using CDC numbers, which will be consistent. And so there’s no opportunity for us to mask those numbers,” Hochul told National Public Radio on Wednesday.

Even with the additional 12,000 deaths, it does not change how New York state ranks nationally. New York still has the third highest total number of COVID deaths in the country, behind California and Texas. And New York still ranks second for deaths per capita, behind New Jersey, according to a Reuters tally.

Hochul is a Democrat who assumed the top job on Tuesday after serving as Cuomo’s lieutenant governor.

The number reported by Cuomo was incomplete because it focused only on confirmed COVID-19 deaths and it excluded those who died at their own homes and other places.

The revised count is based on death certificate data submitted to the CDC, which includes any confirmed or suspected COVID-19 deaths in any location in New York, Hochul said in the statement.

“These are presumed and confirmed deaths. People should know both,” Hochul told NPR.

The revelation came on Hochul’s second day on the job as governor, the first woman to hold New York’s top office. After being sworn in on Tuesday, Hochul made a point of promising the public greater transparency to ensure that New Yorkers “believe in their government again.” read more

New York City Fire Department (FDNY) Ambulances are parked at the emergency entrance of St. John’s Episcopal Hospital, during the outbreak of the coronavirus disease (COVID-19), in the Far Rockaway section of Queens in New York City, U.S., May 20, 2020. REUTERS/Brendan McDermid

Immediately shining a spotlight on the numbers the Cuomo administration chose to report, Hochul became only the latest official to raise questions about whether he was massaging data to improve his image during the pandemic that once gripped New York as the U.S. epicenter.

According to a New York attorney general’s report released in January, Cuomo was criticized for undercounting coronavirus deaths in nursing homes by as much as 50%. read more

In February, Cuomo acknowledged that his office should not have withheld data on COVID-19 nursing home deaths from state lawmakers, the public and press but fell short of apologizing.

Reporting by Anurag Maan in Bengaluru and Barbara Goldberg in New York; Editing by Lisa Shumaker