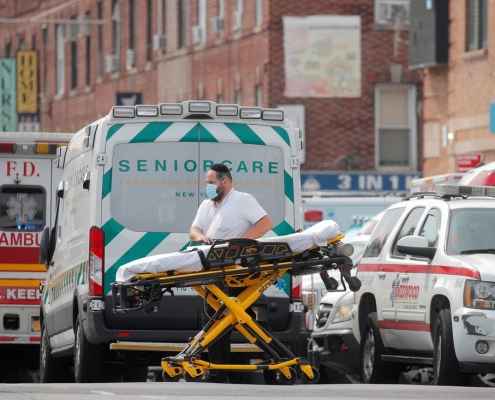 (Reuters) – New York, the former epicenter of the U.S. COVID-19 pandemic, became on Sunday the fourth U.S. state to surpass half a million coronavirus cases amid a nationwide surge in infections.

New York State is reporting 80% more cases in the past four weeks as compared to the previous four weeks, according to a Reuters analysis. The state reported more than 2,000 new daily cases twice in recent days, a daily increase not seen since May.

It is far from the state’s record of 12,847 new cases on April 10 — a period when refrigerated trucks stored bodies outside hospitals and the U.S. Navy hospital ship Comfort sailed past the Statue of Liberty.

California has the most reported cases in the nation at over 900,000, followed by Texas and Florida. However, on a per capita basis, North Dakota, South Dakota and Louisiana have the most cases.

New York has reported over 33,000 deaths, the most in the country and the second highest on a per capita basis after New Jersey.

New York Governor Andrew Cuomo tweeted here on Sunday the positivity rate in the state’s hotspots was 3.18% while it was 1.06% statewide, excluding “micro-cluster” areas.

New Yorkers jammed polling places and stood in line for hours to cast ballots on the state’s first day of early voting on Saturday, ahead of the Nov. 3 presidential election.

New York City is reporting half the cases and deaths of New York State each day. The daily number of current hospitalizations in New York state has doubled in the last four weeks to over 1,000 patients.

In the Northeast, Connecticut, Massachusetts, New Hampshire, New Jersey, Rhode Island and Vermont have seen new cases double in the past four weeks compared with the previous four weeks, according to a Reuters analysis.

Reporting by Anurag Maan and Shaina Ahluwalia in Bengaluru; Editing by Lisa Shumaker