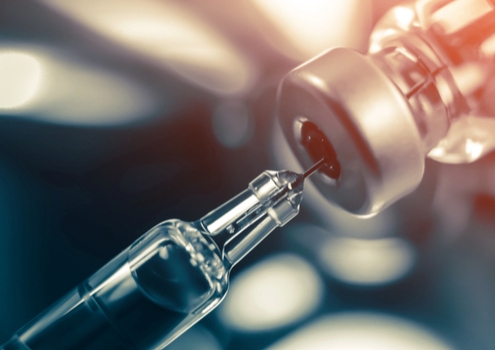 NanoFlu is a recombinant hemagglutinin (HA) protein nanoparticle flu vaccine. Novavax manufactures it using its Sf9 insect cell baculovirus system. The vaccine nanoparticles are produced in cells originally isolated in the 1970s from the ovaries of the fall armyworm (Spodoptera frugiperda). The Sf9 insect cell line can grow apparently forever when infected with a baculovirus (BV), a virus that only infects insects. And the baculovirus can be engineered to carry one or more foreign genes of interest. As a result, it can be programmed to make the Sf9 cells produced whatever protein or proteins intended that are both folded properly and biologically active.

The vaccine is also developed with the company’s Matrix-M adjuvant, which boosts the immune response of the vaccine, requiring less vaccine to be effective.

The primary objective was non-inferior immune response compared to Fluzone Quadrivalent using a day 28 ratio of geometric mean titers (GMT) and the difference in seroconversion rates (SCR) in addition to the overall safety profile of the vaccine. These are both epidemiological and statistical methods of determining an immune response. Immunogenicity was tested by hemagglutination inhibition (HAI) tests using egg-derived reagents.

NanoFlu hit the primary endpoints, both GMT and SCR, for all four strains used in the vaccine. It was well-tolerated and had a safety profile similar to Fluzone Quadrivalent with what the company calls “a modest increase in local adverse events.”

“With these data, we now have a clear path forward to licensure with our differentiated recombinant influenza vaccine,” said Stanley C. Erck, president and chief executive officer of Novavax. “These strong Phase III results align with and validate our previous clinical trials, in which NanoFlu showed higher HAI antibody responses than the leading flu vaccine for older adults. We expect that both Fast Track designation and the accelerated approval pathway from the FDA will help Novavax bring NanoFlu to market as quickly as possible to address the serious public health threat of influenza.”

Gregory Glenn, president of Novavax’s Research and Development, noted that the company was also happy that the vaccine met or exceeded the secondary endpoints for all four strains used. “NanoFlu demonstrated significant improvement against four drifted H3N2 strains that are co-circulating this year. These data, similar to what was shown in our Phase II clinical trial, demonstrate that NanoFlu overcomes issues related to egg-adaptation and antigenic drift. We extend our sincere appreciation to those who volunteered for this important study and to our clinical partners who worked so quickly and diligently on this trial.”

The trial studied 2,652 older adults at 19 clinical sites in the U.S. The patients received either NanoFlu or the Fluzone Quadrivalent. Both of the vaccines were developed with the four flu strains recommended for the 2019-2020 Northern hemisphere flu season. The patients will be followed for about one year after injection. The primary analysis was at Day 28.

Research Groups Suggest COVID-19 Could Be Seasonal
Scroll to top