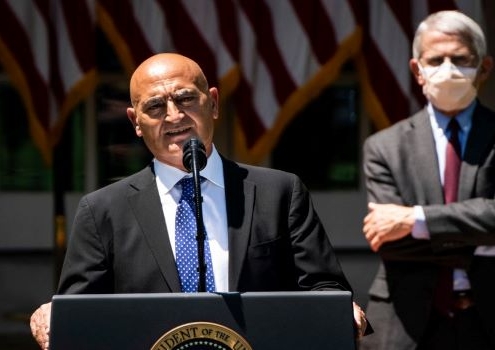 As Operation Warp Speed, the Trump administration’s program to develop and distribute a COVID-19 vaccine, struggles to ramp up vaccinations, one of the approaches under consideration is cutting the doses of the Moderna vaccine.

In an interview on Sunday with CBS’ “Face the Nation,” Moncef Slaoui, Operation Warp Speed’s chief scientific adviser, said they are considering decreasing the doses in people between the ages of 18 and 55, because there is some evidence that the lower dosage in that age group provides “identical immune response” to the recommended 100 microgram dose. Warp Speed is apparently in talks with Moderna. But he said it will be up to the U.S. Food and Drug Administration (FDA) to decide.

“It will be based on facts and data to immunize more people,” he said to CBS, adding, “of course we continue to produce more vaccine doses.” 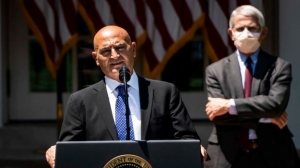 What seems most puzzling about this approach isn’t whether it would be effective, but that actual vaccine production does not appear to be the reason why vaccinations are lagging. Slaoui indicated that 17.5 million does in the U.S. had been shipped as of yesterday, with 1.5 million people receiving the shots in the preceding 72 hours, which is about 500,000 per day. Although this appears to be an improvement over the first couple weeks, the bottleneck appears to be somewhere after the manufacturing process, not from the manufacturing process.

“We are optimistic as we go beyond this holiday season that the numbers will go up, and we are standing ready to do what we are asked,” Slaoui said. “Where there is help to be given, we’re standing by to help.”

Late last week, Anthony Fauci, director of the National Institute of Allergy and Infectious Diseases (NIAID), told NBC’s “TODAY” show, “We would’ve liked to have seen it run smoothly and have 20 million doses into people today, by the end of the (year) 2020, which was the projection. Obviously, it didn’t happen and that’s disappointing. Hopefully, as you get into the first couple of weeks in January, the gaining of momentum will get us to the point where we want to be.”

Without directly responding to Slaoui’s comments, Fauci did say on NBC’s “Meet the Press” that, “We know what the sciences tells us. So my feeling … is let’s do it the way the clinical trials have instructed us to do it. But let’s get more efficient into getting it into people’s arms.”

At this time, Operation Warp Speed has indicated its goal it to ensure that 80% of the 330.7 million Americans get injections by late June. To do that, more than 3 million people will have to be jabbed each day. Two weeks ago, they were averaging about 200,000 people per day, and over the last few days that has ramped up to about 500,000 per day. That’s still a long way from 3 million per day, but it shows signs of improvement.

There is a myriad of reasons for the slow scale-up. Part of it was simply holidays, already overworked health care systems, three major snowstorms, and lack of funding to states. The U.S. health care system is also fragmented, for-profit, with no centralized decision-making. Much of the on-the-ground distribution is being handled by states’ public health systems, which are notoriously underfunded, and the federal funding to the states for vaccine distribution has been minimal and slow.

Fauci and U.S. Surgeon General Jerome Adams report that they are working with state governors to scale-up vaccinations.

Adams told CNN’s “State of the Union,” “We have to understand that this virus also occurred in the midst of a surge. And a lot of the local capacity to be able to vaccinate was being used for testing and responding to surges. But the good news is that we’re seeing it quickly ramp up, thanks to our state partners.”

The U.S. and most countries have held back half of the vaccine supplies from Pfizer-BioNTech and Moderna to ensure that everybody gets appropriately vaccinated with two doses 21 (Pfizer-BioNTech) or 28 (Moderna) days apart. The U.K., however, modified its guidance last week to get as many people vaccinated with the first dose, which could delay the second dose. This has numerous researchers concerned, because there is not much evidence to suggest the vaccine is effective unless both doses are administered.

Slaoui has said that is not something the U.S. plans to do, arguing that it would not be responsible to provide the first dose without guaranteeing those people would get their second dose without supporting data.

The U.K. has also authorized the AstraZeneca-Oxford University vaccine and dosed their first patient today. The AstraZeneca-Oxford vaccine is easier to transport and store than the Pfizer-BioNTech vaccine, which requires storage temperatures around -94 degrees F, and the Moderna vaccine also requires cold—although not as cold—storage temperatures.

On the other hand, the AstraZeneca-Oxford vaccine has presented some confounding data. A patient in the U.K. suffered a severe reaction, transverse myelitis, a partial spinal paralysis, which halted the trials globally. They began quickly in the U.K. and elsewhere but were delayed in the U.S. for weeks while the FDA investigated. Another issue was a puzzling one—about 1800 participants accidentally received a half-dose for the first injection, and that cohort had an efficacy rate of about 90%, compared to about 62% in the rest of the cohorts. Researchers still don’t know why.

The Moderna and Pfizer-BioNTech vaccines had efficacy rates of about 95% in clinical trials.