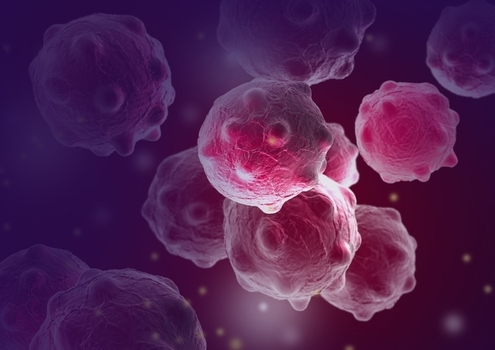 Merck’s checkpoint inhibitor Keytruda (pembrolizumab) just keeps going and going. The company announced positive data from the Phase III KEYNOTE-355 trial looking at Keytruda in combination with chemotherapy as first-line treatment for metastatic triple-negative breast cancer (mTNBC). The PD-1 inhibitor has racked up an impressively broad array of approved indications, and the only other checkpoint inhibitor approved for this indication is Roche’s Tecentriq (atezolizumab).

In the trial, patients whose tumors expressed PD-L1 with a Combined Positive Score (CPS) greater than or equal to 10, Keytruda with chemotherapy showed a statistically significant and clinically meaningful improvement in progression-free survival (PFS). The drug combination decreased the risk of disease progression or death by 35%, improving PFS to a median of 9.7 months compared to 5.6 months for patients receiving only chemotherapy.

In patients whose cancer expressed PD-L1 with a CPS greater than or equal to 1, the combination improved PFS compared to chemotherapy alone, 7.6 months compared to 5.6 months, but this was not statistically significant.

The company indicates the trial will continue without changes to study the other dual primary endpoint of overall survival (OS).

“The progression-free survival results observed in KEYNOTE-355 have the potential to impart real change for certain patients with metastatic triple-negative breast cancer in the first-line setting,” said Roy Baynes, Merck Research Laboratories senior vice president, head of global clinical development and chief medical officer. “Merck is committed to evaluating innovative treatment approaches, anchored by Keytruda, across multiple settings and stages of breast cancer. We are encouraged by the positive results from the Phase III KEYNOTE-355 and neoadjuvant/adjuvant KEYNOTE-522 studies, which demonstrate the potential of Keytruda in combination with chemotherapy for the treatment of triple-negative breast cancer.”

TNBC is an aggressive form of breast cancer with a high recurrence rate within the first five years after diagnosis. TNBC tests negative for estrogen receptor, progesterone receptor and human epidermal growth factor receptor 2 (HER2), meaning the cancer does not usually respond to therapies that target those hormonal markers. About 15 to 20% of patients with breast cancer are diagnosed with TNBC.

In March 2019, the U.S. Food and Drug Administration (FDA), approved Roche’s Tecentriq for this indication. The checkpoint inhibitor was approved with the chemotherapy drug nab-paclitaxel (Abraxane). It was approved with a companion diagnostics test, the VENTANA PD-L1 (SP142) Assay.

Merck will use the data to try and get approval for Keytruda for this indication as well, with the two drugs going head-to-head in the marketplace. The only real way to measure which drug is better is in a comparison trial, but in the separate trials, the Keytruda-chemotherapy combination appeared to have a slightly better benefit, putting off disease progression in Merck’s trial by 9.7 months while the Roche trial was 7.2 months. Their chemotherapy figures were remarkably similar, 5.6 months in Merck’s and 5.5 months in Roche’s.

“Cross-trial comparisons are difficult and have a lot of limitations,” Baynes said. “Having said that, we do think that -355 compares very favorably.”

Another positive aspect of the KEYNOTE-522 trial was that, in September 2019, the combination therapy showed that, in pre-surgery patients, the combination was better than chemotherapy alone, clearing 64.8% of patients of all cancer signs form breast and lymph node tissue.

Baynes said, “I think we are the only (immuno-oncology) drug that has shown the results that we have shown in the neoadjuvant setting, so I think the practicing oncologists will have to review the data and evaluate the risk-benefit basis based upon what they see.”

France says any Sanofi COVID-19 vaccine for the world, no favorites
Scroll to top