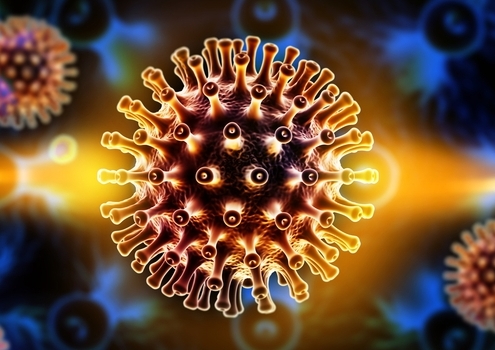 Researchers at the University of Maryland Baltimore County identified a single nucleotide that controls two forms of the HIV virus’s RNA. This nucleotide determines which version of viral RNA an infected cell manufactures, with both forms necessary for HIV replication. The result of this is that the infected cells generate two different forms of the virus’s RNA. The research was published in the journal Science.

“This functional diversity is essential for the virus to replicate in the body,” said Joshua Brown, lead author of the study. Brown earned his Ph.D. from UMBC in 2018 and continues to conduct research while completing his MD. “The virus has to have a proper balance between the two forms of RNA. For decades, the scientific community has known that two different structural forms of HIV RNA exist—they just didn’t know what controls that imbalance. We’ve discovered that a single nucleotide is having a huge effect, which is a paradigm shift in understanding how HIV works.”

The research opens up possibilities for new therapies, potentially moving away from the “cocktail” of HIV drugs that target different viral mechanisms, to just a single one that targets the enzyme.

“Every time we get a new drug in HIV, we exponentially improve the chances of individuals finding a drug that works for them, where resistance is a little less likely,” said Hannah Carter, a 2017 UMBC alumna, current MD/Ph.D. student at University of Michigan, who is one of the study’s author. “Every time a new drug can get on the scene, that’s a significant improvement for the lives of HIV patients.”

Investigators at the HudsonAlpha Institute for Biotechnology, the University of California, San Francisco (UCSF) and the University of Alabama at Birmingham (UAB), identified a gene that doubles the risk of several neurodegenerative diseases, including Alzheimer’s, amyotrophic lateral sclerosis (ALS) and frontotemporal dementia (FTD). They analyzed whole genomes of more than 1,100 people and found a rare variant of the TET2 gene. Once they had the sequence data, they analyzed the genomes of 493 people with AD, ALS, or FTD and 671 healthy people. They then looked at previously generated data from more than 32,000 healthy people and individuals with neurodegenerative disease. They confirmed that variants in TET2, in both protein-coding and non-coding regions, were more likely in the genomes of the people with neurodegenerative diseases.

A research study out of China found genetic markers of SARS-CoV-2 in the air in two hospitals in Wuhan, China. It’s not known if the virus in the samples are infectious, but it does suggest the virus might be transmitted in the air. It is mostly transmitted through larger droplets on surfaces, which are then transferred to the mouth or nasal passages by the hands. The concentration of the SARS-CoV-2 RNA in aerosols detected in isolation wards and ventilated patient rooms was very low but elevated in the bathroom areas. In most of the public areas, the levels of airborne virus were undetectable.

Researchers from Julius-Maximilians-Universität (JMU) Wurzburg in Bavaria, Germany and colleagues decoded the genome of the herpes simplex virus 1 using new techniques. One of the things they found was that instead of 80 “open reading frames” or ORFs, which are the part of the genome that is translated, as expected, there were actually 284 ORFs. The findings allow them to more precisely study the individual genes of the virus. HSV-1 is best known for cold sores, but HSV-1 can also cause life-threatening pneumonia and in some cases, encephalitis.

Scientists at the Walter and Eliza Hall Institute in Australia identified a new type of immune cell in mammary ducts that keeps breast tissue healthy. They utilized advanced 3D imaging techniques and observed how the immune cells monitor for threats in the mammary ducts and help to maintain tissue health by digesting dying milk-producing cells. They are a star-shaped ductal macrophage.

In a letter published April 29, in the New England Journal of Medicine, investigators from New York City’s Mount Sinai described five COVID-19 patients all under the age of 50 who had large vessel strokes over a two-week period. Of the five, one died, one is still hospitalized, two are in rehabilitation and one was discharged and sent home. All five patients had mild or no symptoms of COVID-19. A study out of the Netherlands, published in Thrombosis Research, also described increased rates of thrombotic complications in 184 critically ill COVID-19 patients with pneumonia, citing a 31% rate of thrombotic complications. The risks including pulmonary embolism (PE), deep venous thrombosis (DVT), ischemic stroke, heart attack (myocardial infarction), or systemic arterial embolism.

Andrew Rogove, medical director, Stroke Services at Northwell Health’s Southside Hospital in Bay Shore, New York, told Forbes, “It appears that the underlying cause of stroke in young patients with coronavirus are cerebral emboli. Many of the patients infected with coronavirus are hypercoagulable and this extra propensity for forming blood clots is leading to a higher incidence of strokes in coronavirus patients including younger patients.”