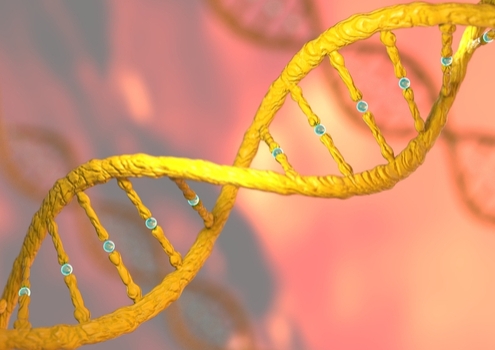 Researchers at the University of Pennsylvania School of Medicine found that certain changes in DNA sequences can trigger the resulting genome to misfold in such a way that the person is at increased risk for Type 1 diabetes. The mutations changed how DNA was folded inside the nucleus, which affected the induction or repression of genes associated with Type 1 diabetes. They published their research in the journal Immunity.

“While we know that people who inherit certain genes have a heightened risk of developing Type 1 diabetes, there has been little information about the underlying molecular factors that contribute to the link between genetics and autoimmunity,” said Golnaz Vehedi, assistant professor of Genetics in the Perelman School of Medicine at Penn and senior author of the study. “Our research, for the first time, demonstrates how DNA misfolding—caused by sequence variation—contributes to the development of Type 1 diabetes. With a deeper understanding, we hope to form a foundation to develop strategies to reverse DNA misfolding and change the course of Type 1 diabetes.”

Type 1 diabetes is one of many autoimmune diseases where the body’s immune system attacks individual cells. In Type 1 diabetes, the pancreas halts production of insulin. Immune cells called T-lymphocytes play a major role in destroying the insulin-producing pancreatic beta cells. Using ultra-high-resolution genomic maps, they measured the 3D DNA folding in T-lymphocytes in two strains of mice, diabetes susceptible and diabetes resistant. The two strains had more than six million differences in their genomic DNA, similar to the differences between two humans. They found that a specific type of T-cell genome misfolding occurred in diabetes-susceptible mice, and it happened before the mouse became diabetic. They believe it would lead to early diagnosis.

Researchers at the University of Helsinki have identified a molecule called BT13 that potentially can increase levels of dopamine in the brains of Parkinson’s disease patients. Parkinson’s disease affects the brain’s nerve cells that produce dopamine. The symptoms include muscle rigidity, tremors, and changes in speech and gait. Their research builds on work on glial cell line-derived neurotrophic factor (GDNF), which is another molecule that targets the same receptors in the brain. In a large clinical trial funded by Parkinson’s UK, the molecule showed promise in restoring damaged cells in Parkinson’s, although the results were not completely clear. Also, because GDNF is a very large molecule, it requires complex surgery to deliver it to the brain. BT13, on the other hand, is a small molecule, making it easier to administer.

Subtle Cognitive Decline May Be Present Earlier in Alzheimer’s Patients

Abnormal levels of beta-amyloid plaques are associated with Alzheimer’s disease. The disease itself is progressive, but slow to develop. However, a new study found that there were subtle differences in cognition, such as fewer words recalled on a memory test, that were associated with early accumulations of beta-amyloid. The research suggests that, unlike what was previously thought, even earlier beta-amyloid accumulation has minor effects on cognition and memory, which might be testable for early diagnosis.

Investigators at Penn State found that a combination of green tea extract and exercise decrease the severity of obesity-related fatty liver disease in mice by 75%. Although not yet conducted in humans, it does suggest a path forward. Because of risk factors like obesity and type 2 diabetes, fatty liver disease is projected to affect 100 million people by 2030 and there are currently no validated therapies. Mice were fed a high-fat diet for 16 weeks, and given green treat extract and made to run on a wheel regularly. The mice receiving this regimen had only a quarter of the lipid deposits in their livers compared to the control group mice.

Researchers at The University of Texas MD Anderson Cancer Center determined that chemotherapy caused increased heterogeneity inside the tumor, which causes multiple resistance mechanisms. They developed novel disease models using isolated circulating tumor cells (CTCs) from a blood draw. The cells were placed under a mouse’s skin, and they became tumors representative of the patient they came from. In the SCLC models, circulating tumor cell-derived xenografts (CDX) are unique to each patient and allow the investigators to assess treatment responses to therapy in addition to changes that may occur after therapy. They then performed single-cell RNA sequencing on 14 CDX models and identified gene expression differences between individuals cells from chemotherapy-sensitive CDX tumors compared to the ones that remain resistant.

Scientists at Penn State studying neurodevelopmental disorders like schizophrenia and autism, evaluated the effects of more than 300 pairwise knockdowns, which means reducing the expression of two genes at the same time. They were working in the fruit fly versions of genes located in a region of human chromosome 3 that, if deleted, has been associated with these disorders. They found that one gene, NCBP2, seems to be a key modifier that influences the impact of other genes in the deletion.

“Neurodevelopmental disorders, like schizophrenia and autism, are often associated with large genetic deletions or duplications,” said Santhosh Girirajan, associate professor of genomics in the biochemistry and molecular biology and anthropology department at Penn and head of the research team. “These ‘copy-number variants’ can contain many genes, so piecing together the molecular mechanisms that lead to these disorders is incredibly difficult. The deletion on human chromosome 3, referred to as 3q29, encompasses 1.6 million base pairs and includes 21 genes. Testing the interactions among these genes in a mammalian model would be cost- and time-prohibitive, so we use the fruit fly, which allows us to test a large number of genetic interactions relatively quickly.”

The primary impact of NCBP2 interactions was to disrupt the cell cycle and increase cell death. They propose that this gene could modify several cellular processes, not necessarily directly associated to apoptosis, but which eventually cause a cascade effect that leads to cell death.