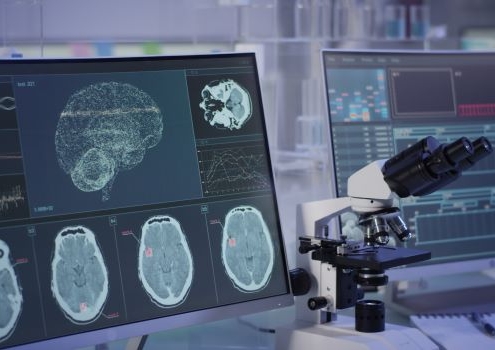 Parkinson’s disease is a brain disorder that can result in tremors, stiffness and difficulties walking, balancing and general coordination problems. And although a lot is known about it, there’s always more to learn, and researchers discovered a key finding, a specialized group of neurons associated with the disease. For that and more research news, continue reading.

Specialized Neurons Identified that are Key to Parkinson’s Disease

Researchers at the University of Copenhagen – The Faculty of Health and Medical Sciences found that activating a specialized group of neurons within the brainstem of mice restored full movement function in mice with symptoms of Parkinson’s disease. They believe this will help clinicians focus Deep Brain Stimulation to the correct location and improve treatment of motor symptoms in Parkinson’s disease.

Although Parkinson’s is primarily treated with drugs, in some cases physicians use Deep Brain Stimulation, where a surgeon places a thin metal wire in the brain. Through the wire, they can transmit electrical pulses. This is effective at treating tremors but doesn’t work as well at alleviating problems with walking and freezing. The research was published in Nature Communications.

“We use a technology to target specific group of cells in the PPN (pedunculopontine nucleus) in order to close in on what areas are the best to stimulate, if we want to alleviate these particular symptoms,” said Ole Kiehn, corresponding author of the study and professor at the university’s Department of Neuroscience. “The result shows that the motor improvement is optimal, if we stimulate what we call excitatory neurons in the caudal area of the PPN.”

In Parkinson’s, the nerve cells that produce dopamine progressively die. The typical therapeutic approach is drugs that replace the missing dopamine. However, patients tend to respond less and less to this over time. In the late stages of the disease, the movement symptoms don’t respond well to treatment. In the laboratory mice, when they stimulated the specific areas of the PPN, the animals could walk normally compared to before the stimulation.

Scientists at the University College London (UCL) and the National Institutes of Health (NIH) found why a common genetic variant makes amyotrophic lateral sclerosis (ALS) and frontotemporal dementia (FTD) worse. They found how TDP-43 protein depletion, which is linked to 97% of ALS and half of FTD cases, corrupts the genetic code for UNC13A, a critical neuronal protein. UNC13A enables nerve cells to communicate with each other by releasing a neurotransmitter. But animal models suggest that loss of UNC13A from neurons can be fatal. They believe that corruption of the genetic code for UNC13A is similarly harmful.

The investigators used CRISPR-Cas9 gene editing in skin-derived human stem cells to create neuronal cells and then remove the TDP-43 protein. This allowed them to study how the neurons without TDP-43 were different from healthy neurons. They discovered that the messenger RNAs (mRNAs) for UNC13A protein were corrupted, unable to correctly manufacture the UNC13A protein. When they then evaluated brain samples in patients with ALS and FTD, they found that their mRNAs for the UNC13A were incorrect as well. They believe this finding may be key to new therapies targeting UNC13A and TDP-43.

The Connection Between Diet, Diabetes and Cardiovascular Disease

Researchers with the German Center for Diabetes Research established a link between an unhealthy diet and unfavorable ceramide levels in the blood. Ceramides are specific lipid (fat) molecules that are produced when the body metabolizes fats and have been associated with the development of type 2 diabetes and cardiovascular diseases. Although it’s generally known that unhealthy diets contribute to heart attack, stroke and type 2 diabetes, precisely what mechanism is involved wasn’t clear. The study profiled the ceramides and dihydroceramide in the blood. They found that increased meat consumption, especially red and processed meat, was linked with unfavorable levels of ceramides associated with diabetes.

A published research study conducted by Johns Hopkins University Bloomberg School of Public Health looked at the long-term efficacy of four vaccines, Pfizer-BioNTech, Moderna, Johnson & Johnson and AstraZeneca-Oxford. All of the studies looked at the period prior to the rise of the Omicron variant. The analysis found that the vaccines lose some effectiveness in preventing overall COVID-19 infection. They retained almost all of their ability to prevent severe illness up to six months after full vaccination. In the one-to-six-month period after full vaccination, protection against infection dropped by about 21% on average, while protection against severe disease fell by only about 10%. Boosters were not evaluated.

Obesity and its Effects on the Immune System

Investigators with the Boston University School of Medicine demonstrated that in experimental models, obesity led to senescence of macrophages, a form of immune cell. Older cells, in general, can become senescent, where they permanently stop dividing but don’t die. However, senescent cells release toxic pro-inflammatory molecules associated with a number of diseases. Prior to this, they were not aware that macrophages could become senescent. They found that many macrophages within obese tissue were senescent and that those senescent cells might be drivers of fat tissue fibrosis or scarring. This also suggests that obesity speeds cellular or biological immune aging. In healthy people, macrophages help clean the tissue from dead adipocytes and aid in cellular turnover. But when macrophages become senescent, they lose this capacity. They also secrete a few molecules, including osteopontin, which is responsible for adipose tissue fibrosis, suggesting that macrophages age faster in obese animals. This may contribute to the pathological thickness or scarring of fat tissue seen in obese people with type 2 diabetes.

“This study shows that in severe COVID-19, this key component of the immune system is disrupted, whether the intestine itself is infected with SARS-CoV-2 or not,” said Joe Spencer, from King’s College London. “This would likely contribute to the disturbances in intestinal microbial populations in COVID-19 reported by others.”

Medical oxygen running out in Ukraine as war rages, WHO warns
Scroll to top