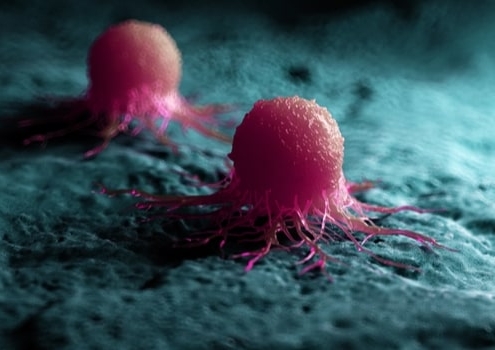 A study published in the Nov. 2 edition of Cell suggests that pancreatic cancer cells avoid starvation by signaling to nerves. This encourages them to grow into dense tumors and release the nutrients the cells need to survive.

Researchers from NYU Grossman School of Medicine, the Department of Radiation Oncology at NYU Langone Health, and Perlmutter Cancer Center drew the conclusions after experimenting with cancer cells, mice and human tissue samples.

They specifically conducted the study to address pancreatic ductal adenocarcinoma (PDAC), the deadliest form of pancreatic cancer that has a five-year survival rate below 10%. These types of tumors encourage the growth of tissue that presses on blood vessels, reducing the supply of blood-borne nutrients.

“Our study offers more proof that pancreatic cancers are remarkable metabolic scavengers, which contributes to their deadliness,” said corresponding author Alec Kimmelman, MD, Ph.D., the Anita Steckler and Joseph Steckler Chair of the Department of Radiation Oncology at NYU Langone. “The ability of nerves to funnel nutrients from the bloodstream to the more austere pancreatic tumor microenvironment is a fascinating adaptation, and could lead to therapeutic approaches that interfere with this unique flexibility.”

When pancreatic cancer cells are lacking serine, they take advantage of the process by which messenger RNA strands are translated into proteins. Mice with PDAC were fed serine-free diets and showed a 50% slower growth in tumors. The researchers also utilized a drug approved by the U.S. Food and Drug Administration called LOXO-101, which blocks the activation of a receptor protein on the surface of neurons that interacts with nerve growth factor. Although the product alone did not slow tumor growth, it slowed it by an additional 50% when combined with a serine-free diet.

Another drug designed to address first-line metastatic PDAC that is now being examined is the CXCR4-inhibitor Motixafortide. BioLineRx Ltd. announced on Oct. 29 that it will begin testing the product, along with anti-PD-1 cemiplimab and standard-of-care chemotherapy. The Phase II trial will initially enroll between 10 and 12 PDAC patients, and will be expanded to 40 patients following an evaluation of the initial group.

“Chemotherapy is the current standard of care for patients with metastatic PDAC, however the rates of response and survival remain very low,” said Dr. Gulam Manji, Assistant Professor of Medicine and Director of Pancreas Medical Oncology and Translational Research at Columbia University Vagelos College of Physicians and Surgeons, and lead investigator. “In addition, although immunotherapy has resulted in a paradigm shift in the treatment of a number of solid tumors, trials with immune checkpoint blockade in PDAC have been disappointing. Over several years of pre-clinical research, we have found that combining a CXCR4 inhibitor with immunotherapy and chemotherapy shows promising results in a mouse model of pancreatic cancer. In this regard, Motixafortide, with its high affinity and long receptor occupancy, together with the encouraging preliminary results published from the COMBAT trial, makes it an attractive candidate for a combination therapy with anti-PD-1 and chemotherapy. We look forward to initiating the first clinical trial to treat patients in first-line metastatic PDAC with this promising treatment regimen.”

Pancreatic cancer has a low rate of early diagnosis. Its incidence rate in the U.S. is estimated at 3.2% of new cancer cases.