ZURICH (Reuters) – Swiss drugmakers Roche and Novartis each won European approval for drugs on Tuesday in a sign that the rival Basel-based companies are increasingly competing for the same patients.

FILE PHOTO: The logo of Swiss drugmaker Roche is seen at its headquarters in Basel, Switzerland January 30, 2020. REUTERS/Arnd Wiegmann

Roche’s Evrysdi, already approved in the United States, gained backing from the European Commission for spinal muscular atrophy (SMA), where Novartis’s $2.1 million per patient gene therapy Zolgensma has become the treatment of choice for infants diagnosed with the genetic, muscle-wasting disease.

Separately, Novartis’s Kesimpta, also with U.S. approval, won European regulators’ blessing in multiple sclerosis, where Novartis hopes to lure patients away from Roche’s $4 billion seller Ocrevus. The two drugs work similarly, though Novartis’s Kesimpta is a shot, while Ocrevus is an infusion.

That the companies’ drugs overlap is no coincidence: Roche for several years has been expanding beyond the cancer treatments that were for years its mainstay, while Novartis under Chief Executive Vas Narasimhan has sold off over-the-counter medicines to focus on specialty prescription treatments that command higher prices. 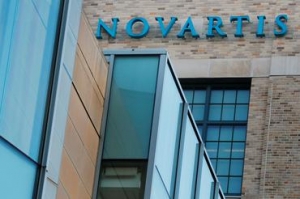 Both Evrysdi and Kesimpta are forecast as blockbuster treatments, to reap more than $1 billion annually.

Evrysdi was approved for treating SMA in patients two months of age and older, with a clinical diagnosis of SMA Type 1, Type 2 or Type 3 or with one to four SMN2 copies, Roche said.

Evrysdi and Novartis’s Zolgensma are already taking away sales from Biogen’s rival treatment Spinraza, whose U.S. sales in the final quarter of 2020 fell by more than a third.