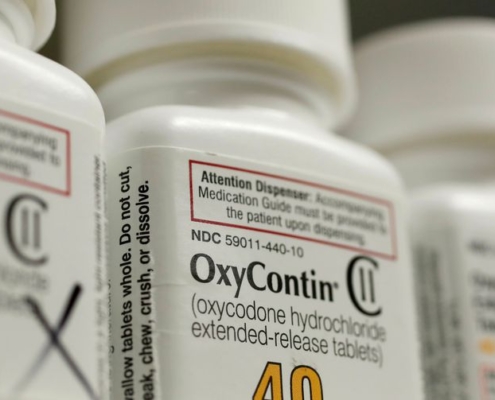 (Reuters) – The Sackler family owners of Purdue Pharma LP reached a deal with nine state attorneys general to pay up to $6 billion in cash to resolve widespread litigation alleging that they fueled the U.S. opioid epidemic, bringing the OxyContin maker closer to exiting bankruptcy.

The deal was revealed on Thursday in a court filing by a mediator who oversaw renewed talks between the Sacklers and the states that had blocked a previous settlement that included a $4.3 billion cash payment.

The family agreed to pay at least $5.5 billion in cash, which will be used for abating a crisis that has led to nearly 500,000 opioid overdose deaths over two decades.

The Sackler family owners said in a statement that they “sincerely regret” that OxyContin “unexpectedly became part of an opioid crisis.”

The family members said they acted lawfully but a settlement was by far the best way to help resolve a “serious and complex public health crisis.”

The deal must still be approved by a judge.

The value of the deal could grow as the family members sell additional assets.

Purdue said on Thursday that the new settlement would provide additional funding for opioid abatement programs, overdose rescue medicines, and victims, while putting the company on track to resolve its bankruptcy case on “an expedited schedule.”

Opioid overdose deaths soared to a record during the COVID-19 pandemic, including from the powerful synthetic painkiller fentanyl, the U.S. Centers for Disease Control and Prevention has said. Deaths totaled 75,673 in the year ending April 2021, up 35% from a year earlier.

President Joe Biden said in his address to Congress on Tuesday that he would make fighting the opioid crisis one of his priorities.

The Sacklers’ agreement follows an announcement on Friday by the three largest U.S. drug distributors and Johnson & Johnson (JNJ.N) that they would finalize a $26 billion plan to settle allegations over their role in the opioid crisis. read more

Purdue filed for bankruptcy in 2019 in the face of thousands of lawsuits accusing it and members of the Sackler family of fueling the opioid epidemic through deceptive marketing of its highly addictive pain medicine.

The company pleaded guilty to misbranding and fraud charges related to its marketing of OxyContin in 2007 and 2020. Members of the Sackler family have denied wrongdoing.

The deal was announced two months after a judge upended the earlier settlement with the lower proposed Sackler family cash contribution to Purdue’s reorganization plan. In exchange, the Sacklers had received legal protections known as nondebtor releases.

Eight states and the District of Columbia opposed that plan, in large part because of the sweeping protections for the Sacklers.

Under the new settlement, the states agreed to stop fighting Purdue’s effort to protect the Sacklers from future opioid lawsuits.

There is currently a legal shield in place that prevents the Sacklers from being the target of current and future suits. A bankruptcy judge extended that shield on Wednesday until March 23, and Purdue is seeking to make that protection permanent.

‘WE STOOD UP TO THE SACKLERS’

“No one is under any illusion this solves all the problems we’re facing,” Tong said in a statement.

The settlement does not prevent criminal charges from being filed. Tong said he would support a criminal investigation if it were pursued by the U.S. Department of Justice.

Under Thursday’s settlement, $276 million of the increased Sackler contribution will be dedicated to the states that had opposed the prior deal and the District of Columbia.

Washington State, for example, will receive up to $194 million, compared to the $70 million it would have received under the previous deal.

“We stood up to the Sacklers and forced them to relinquish more of their fortune to help undo the damage they caused.” Washington Attorney General Bob Ferguson said in a statement.

Purdue now has agreements in place with all 50 U.S. states and the District of Columbia, but those agreements must be approved by the bankruptcy court. The states that previously opposed the restructuring were California, Purdue’s home state of Connecticut, Delaware, Maryland, Oregon, Rhode Island, Vermont and Washington.

Reporting by Tom Hals in Wilmington, Delaware and Jonathan Stempel and Dietrich Knauth in New York; Editing by Noeleen Walder and Bill Berkrot