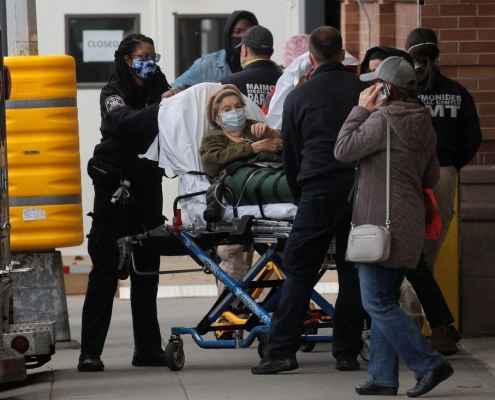 LOS ANGELES (Reuters) – The mayor of San Francisco on Friday ordered new lockdowns and business restrictions across the Bay Area in the face of the COVID-19 surge, as political leaders nationwide ramp up pressure on Americans to stay home until vaccines can be distributed.

The new measures announced by Mayor London Breed, a first-term Democrat, apply across five Bay Area counties and are among the harshest of any major U.S. city, closing all personal services, outdoor dining and most public gatherings.

“What we are seeing in our city, our region, our state and our country is a virus that is taking over,” Breed, 46, said in announcing the new clamp down.

Breed said she was unwilling to wait for Newsom’s mandate to take effect in the Bay Area, adding: “If you’re not working to stay ahead of this virus you’re falling far, far behind and very quickly.”

Starting at 10 p.m. this Sunday, San Francisco will close all outdoor dining, outdoor playgrounds, zoos and aquariums along with other measures, according to a statement on the mayor’s website.

“Low contact retail such as pet grooming, electronics or shoe repair services, may only operate in a curbside drop-off context,” the statement read. “All other retail, including grocery stores must reduce capacity to 20%.”

Both Newsom and Breed have been criticized after dining on separate nights in November at the same posh Napa County restaurant, the French Laundry, despite repeatedly admonishing Californians to avoid such outings.

More than 213,830 new cases and 2,861 deaths were reported on Thursday, according to a Reuters tally of official data. With U.S. COVID-19 hospitalizations also at record levels, some experts project the death toll could soon surpass 3,000 per day.

The University of Washington’s Institute for Health Metrics and Evaluation now projects nearly 539,000 COVID-19 deaths by April 1, almost double the current death toll, even as vaccines start to become available.

The two medications could soon receive emergency use authorization from the U.S. Food and Drug Administration, clearing the way for the inoculation of some 20 million Americans by the end of the year, FDA Commissioner Stephen Hahn told Reuters in an interview on Friday. 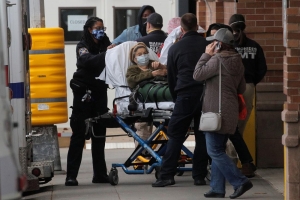 Patients are seen outside the emergency entrance at Maimonides Medical Center, as the spread of the coronavirus disease (COVID-19) continues, in Brooklyn, New York, U.S., December 4, 2020. REUTERS/Brendan McDermid

“I will be first in line and I will encourage my family to take this vaccine,” Hahn said.

The U.S. government’s first shipment of a vaccine will be shared among states and federal agencies, including the Department of Defense. But it will fall far short of protecting high priority groups such as healthcare workers, a Reuters analysis has found.

“For the time being, and the foreseeable future, the demand for vaccines is going to exceed the supply by a lot, even for the highest priority groups that are identified,” said Josh Michaud, the Kaiser Family Foundation’s associate director of global health policy.

Dr. Anthony Fauci, a member of the White House coronavirus task force, said on Friday he expected to see another surge in infections following the Thanksgiving holiday, when many Americans traveled to visit family.

“We really have to intensify our public health measures,” Fauci, director of the National Institute of Allergy and Infectious Diseases, told NBC’s “Today” show.

Fauci also said he has accepted President-elect Joe Biden’s offer to be his chief medical adviser.

Biden, a Democrat who defeated Donald Trump in the November election, has said that upon taking office on Jan. 20 he would enact mask mandates where he has authority, such as federal buildings and for interstate travel.

Biden also told CNN he would get vaccinated publicly, as former presidents Bill Clinton, George W. Bush and Barack Obama have pledged, in order to boost public confidence in the medications.

The latest IHME projection showed that if mask-wearing increased to 95%, combined with the expected vaccine rollout, approximately 66,000 lives could be saved, compared to a vaccine rollout scenario with current mask-wearing levels remaining the same,” it said in a news release.

“Even with a vaccine, if states do not act to bring current surges under control, the death toll could reach 770,000 by April 1,” the IHME news release said.