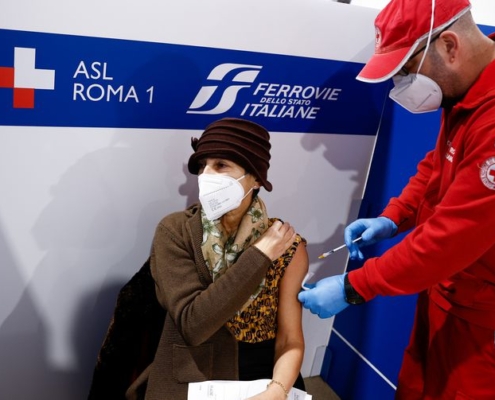 By Nancy Lapid
(Reuters) – The following is a summary of some recent studies on COVID-19. They include research that warrants further study to corroborate the findings and that has yet to be certified by peer review.

A year after infection with the coronavirus, when antibodies in the blood are barely detectable, the immune system continues to “remember” the virus and should respond to some extent upon re-encountering it, a study from China suggests.

Researchers studied 141 people infected with the virus in the first half of 2020 who provided blood samples 12 months later. None of them had been vaccinated in the interim. Most individuals still had low levels of antibodies, and most of those younger than 60 still had some antibodies that could neutralize the virus, according to a report published on Wednesday in The Lancet Microbe. But in everyone – regardless of age or severity of the original infection, and including patients who had lost their neutralizing antibodies – responses by so-called memory B cells and memory T cells were still evident “and were not disrupted by new variants,” the researchers said. These defenses do not prevent infection but they do help to prevent severe disease. 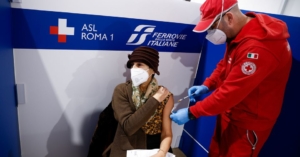 A woman receives a dose of the vaccine against the coronavirus disease (COVID-19), on the day Italy brings in tougher rules for the unvaccinated, at a Red Cross vaccination centre by Termini main train station in Rome, Italy, January 10, 2022. REUTERS/Guglielmo Mangiapane

Doctors in Texas studied 2,641 women with COVID-19 infections during pregnancy from May 2020 through January 2022. While the weekly numbers of deliveries were similar throughout the study period, the average weekly number of infected women giving birth was 17 early in the pandemic, 14 during the Delta era, and 138 during Omicron, the researchers reported on Thursday in JAMA.

Fewer than 1% of women infected during the Omicron wave required hospitalization, compared to nearly 12% during Delta, they found. “We got very lucky” that Omicron’s transmissibility was not matched by its severity, study leader Dr. Emily Adhikari of UT Southwestern said in a statement.

No adverse effect of mRNA shot for pregnant women, newborns

COVID-19 vaccination during pregnancy with mRNA shots, such as those from Moderna (MRNA.O) or Pfizer (PFE.N) and BioNTech (22UAy.DE), does not appear to cause problems for women or their newborns, according to two studies published on Thursday in JAMA.

One study of 157,521 pregnancies, conducted in Scandinavia, found no significant links between the vaccines – mostly given during the second or third trimester – and pregnancy problems. The other study involved 97,590 women in Canada, including 22,660 who received at least one dose of a vaccine during pregnancy and 44,815 who were vaccinated after pregnancy. Vaccination during pregnancy, compared with after pregnancy and with no vaccination, was not significantly associated with childbirth complications for mothers or babies.

An editorial published with the two reports calls for similar research in countries where other types of COVID-19 vaccines are more commonly used in pregnancy.