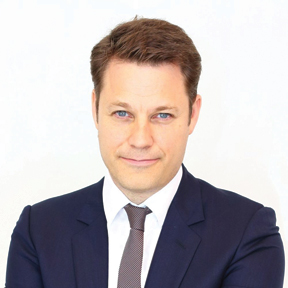 Grünenthal Group named Gabriel Baertschi to become the company’s new CEO as of Oct. 1, 2016. Baertschi will join Grünenthal from AstraZeneca, where he currently serves as country president for Japan. He succeeds Prof. Dr. Eric-Paul Pâques, who has been the CEO of the Grünenthal Group.

Baertschi has more than 17 years of international experience in the pharmaceutical industry, including the last three years as country president for AstraZeneca in Japan when he was responsible for an organization of more than $3 billion in sales and over 3,000 employees across R&D, manufacturing, and commercial functions. Under Baertschi’s tenure, AstraZeneca moved from the 12th to the 6th best-selling pharma company in Japan, and significantly shortened drug development timelines.

Before his role in Japan, he served as AstraZeneca’s country president for Germany and earlier in his career served as country manager in various emerging markets.

“I am honored to have been elected as Grünenthal’s CEO. It is a privilege to be part of an organization that delivers high quality products and innovative solutions to the patients,” Baertschi notes. “Grünenthal is an organization led by a purpose: to bring true benefits to patients by being an entrepreneurial specialist. I am deeply committed to building long-term value for patients, clinicians, and our partners together with a very experienced team at Grünenthal.”

Dr. Wilhelm Moll, chairman of the supervisory board, says the board chose Baertschi after conducting a thorough search process. “We are delighted that Gabriel Baertschi will join Grünenthal Group as CEO,” Moll says. “His deep experience in growing the business and developing the organization in major developed and emerging markets will be a great asset for Grünenthal. He joins us at an exciting time when our strategy of expanding our strategic partnerships in research and development in Europe as well as in Latin America are accelerating our global growth. We would like to thank Prof. Dr. Pâques for his outstanding leadership, integrity and extraordinary personal commitment for the future of a successful Grünenthal.”

Lilly CEO and president to retire
Scroll to top