Healthy citizens are the greatest asset any country can have. ― Winston S. Churchill

I can’t think of a time in history where we’ve shackled a greater pool of resources vital to future than today. Think back to when you were in school. Do you remember your contemporaries who did best in school, missed most of the parties during college and were going into debt while most of us were making our first real money in our 20’s? Virtually all of these gratification-delaying individuals became physicians. Yet, just as newly minted doctors are normally launching their medical career, the Siren Song Of Tech Lures New Doctors Away From Medicine. In part, this is due to med school students observing practicing doctors increasingly burnt out.

Tremendous personal and societal expense has gone into the medical profession. With 10,000 baby boomers (including scores of doctors) hitting retirement age every day, this is a time to strengthen the physician ranks. Yet, as Chrissy Farr of KQED reported, newly minted doctors are dropping out before their residency to pursue other options — technology, in particular. At the same time, practicing doctors are reporting record levels of dissatisfaction and burnout. While there are many dimensions to these issues, I’ve proposed two prescriptions to this affliction.

The first prescription is to shift medical education from the Greek tradition to one that adopts Enlightenment thinking for the next generation of doctors. The second prescription for practicing doctors is that many more organizations need to join the Quadruple Aim movement. The current path isn’t sustainable. Ignoring the well-being of clinicians harms both the clinicians, patients and society as a whole. It won’t be long before it also harms the bottom-line of organizations ignoring the 4th aim — improving the clinician experience.

Medical Education That Embraces the Enlightenment

MacArthur Genius Grant winner, Dr. Jeffrey Brenner made the case during a recent interview that medicine hasn’t embraced the Enlightenment.

I think there’s even a deeper problem, which is that medical training bypassed the Enlightenment almost altogether. So if you look back in the roots of medicine as training, as a pedagogy, it goes back to Greek tradition. And in that Greek tradition it was a lot of memorization, and it was fealty to authority. It was a tradition that was passed down through the generations. It was almost like a priesthood. And med school is really like being inducted into a priesthood of power, money and influence. And the Enlightenment was really about self-critical thinking, and about use of rational thought and the scientific method to prove and disprove things in an objective way. And very few physicians really understand the scientific method. So you don’t necessarily have a science degree to go to med school. And when you’re in med school, most of med school is just memorization. So you know, if you look at how medicine is taught, the first two years are mostly memorization. And then the second two years are rounding on patients with senior physicians in a very steep hierarchy where you learn to do what you’re told and you don’t challenge or embarrass the senior physicians.

Farr’s article outlined something I’ve heard from many young doctors. That is, they are increasingly repelled by a medical education that doesn’t align with their desire to care for patients and have a big impact. The Bay Area may be the canary in the coal mine of a broader issue.

Bay Area-based medical students from Stanford and UCSF have among the very lowest rates of pursuing residency programs after graduation compared to the rest of the country. Stanford ranked 117th among 123 U.S. medical schools with just 65 percent of students going on to residencies in 2011…Many of the dropout docs expressed a desire to improve the doctor-patient experience. In interviews with KQED, several said they spent very little time administering care during medical school, and they felt that patients were too often kept out of the loop.

The challenge is academia is remarkably slow to adapt their methods. Like any other sector, I believe that new entrants are most likely to drive medical education reform. Forbes contributor, David Shaywitz, MD, wrote about the new Dell Medical School at the University of Texas in Austin. I’ve also had a chance to speak with some of Dell Medical School’s leaders and am thoroughly impressed with how they are rethinking medical education and healthcare delivery from the ground up. For example, they hired the former head of IDEO’s healthcare practice, Stacey Chang. Chang is the Executive and founding director of the Design Institute for Health – a collaboration between the Dell Medical School and the College of Fine Arts at the University of Texas at Austin. Just the fact that they hired an IDEO veteran and are pursuing a collaboration between the medical school and college of fine arts speaks to the fresh perspective they are pursuing.

On the West Coast, there are two other new medical education entrants that will be interesting to watch.

Leading thinkers such as Vinod Khosla believe that someone thinking about medical school today would be better off developing data science skills in order to be a top doctor when they are practicing in 10 years. Thus far, I haven’t heard of a medical school that addresses data science as a core medical discipline. Rather, medical schools primarily adhere to the Greek tradition. Dr. Brenner went on to critique medical training echoing a similar theme.

They’re not trained in critical thinking skills that would enable you to pull that evidence apart. Nor are they trained in now a very deep literature and psychology about how distorted evidence can be when you explain it to people around all of the implicit biases that you can set up in decision-making. So you know, I think that you would not only want to train people in how to interpret evidence, but then you would also want to train people in the communication skills necessary to describe risk to patients. Many of these discussions really revolve around helping patients understand risk and those are very hard concepts to explain. There are tremendous ways that doctors can bias those conversations. And we don’t do a good job of that. Nor are we paid in a way that would even encourage you to have those conversations.

Central to reforming how doctors are paid is a rising movement to focus on the Quadruple Aim. Organizations such as Iora Health who have received acclaim for tackling to so-called Hot Spotters (or “frequent fliers” as some call them) are using the Quadruple Aim as a source of competitive advantage.

Acclaim for the Quadruple Aim

From a recent, Physician Foundation Survey (PDF), 81% say they are overextended or at full capacity. Just 19% of doctors say they have time to see more patients. It’s no surprise there is an impact on doctors and their patients as a consequence.

I’ve had the opportunity to visit hundreds of clinics and hospitals which has afforded me the chance to speak with clinicians of all types (doctors, nurses, techs, etc.). Most of my recent visits have been to the highest performing organizations where the physician satisfaction was a stark contrast to the 2012 study that found that 9 out of 10 physicians across the country are unwilling to recommend the profession to others. My unscientific observation was that the organizations that were performing the best on clinical measures consistently had the most professionally satisfied clinicians. 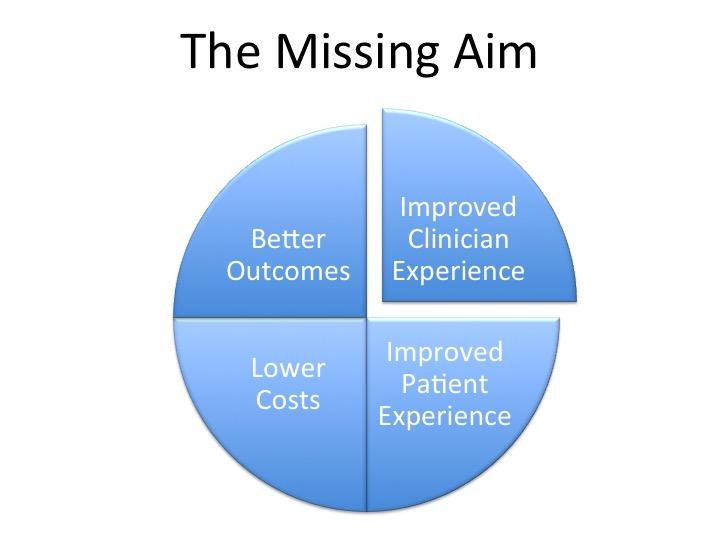 Healthcare’s Trillion Dollar Disruption explored the impact of the changes including what it means for doctors. Despite many physcians’ fears, when the Quadruple Aim is a central focus, the changes are for the better. Dr. Bob Margolis, founder and CEO of HealthCare Partners (acquired by DaVita for $4.4 billion), and one of the physician leaders who has demonstrated extraordinary outcomes described it as follows:

You get to the tipping point, where the physicians go, ‘Wow, life is a whole lot better.’ You know, I only have to see 20 patients a day and I go home at night and I feel like I really helped them’—as opposed to, ‘I saw 45 patients, worked until 10 o’clock because I had to then do all my paperwork, I’m tired and I can barely pay the bills because Medicare and the commercial insurers are cutting back on my reimbursement.’

It’s not uncommon for there to be a 5:1 ratio of administrative/billing staff to doctors due to a flawed reimbursement scheme. Having implemented or reviewed many healthIT systems, my best description to the uninitiated is that billing is the central way these systems are architected and sold. Trying to combine revenue maximization into a clinical process results in a system best described as a Gordian Knot designed by Rube Goldberg. Common sense would suggest that adding yet more complexity (e.g., new payor reporting requirements) on top of an already-flawed model is a recipe for disaster. In contrast, the high performers I’ve observed all rethought the process and supporting healthIT to optimize for a fee-for-value system. It’s stunning that anyone would think that a system optimized for fee-for-service would suddenly be able to do a 180 and be optimized for fee-for-value that public and private payers are rapidly shifting towards.

The question for me became whether there was data to back up the observation that clinician experience was correlated to outcomes since it’s common sense that it would. It turns out there is some data (H/T Dr. Annie Valente for sharing that report). The Lancet reported (PDF) on this recently.

When physicians are unwell, the performance of health-care systems can be sub-optimum. Physician wellness might not only benefit the individual physician, it could also be vital to the delivery of high-quality health care. We review the work stresses faced by physicians, the barriers to attending to wellness, and the consequences of unwell physicians to the individual and to health-care systems. We show that health systems should routinely measure physician wellness, and discuss the challenges associated with implementation.

This has led to call by The Annals of Family Medicine to extend the Triple Aim to the Quadruple Aim. They summarized the article as follows:

The Triple Aim—enhancing patient experience, improving population health, and reducing costs—is widely accepted as a compass to optimize health system performance. Yet physicians and other members of the health care workforce report widespread burnout and dissatisfaction. Burnout is associated with lower patient satisfaction, reduced health outcomes, and it may increase costs. Burnout thus imperils the Triple Aim. This article recommends that the Triple Aim be expanded to a Quadruple Aim, adding the goal of improving the work life of health care providers, including clinicians and staff.

The organizations that ignore the 4th aim are at a competitive disadvantage in a fee-for-value world as they won’t be able to achieve the best outcomes. The organizational impact of ignoring the day-to-day clinician experience will be exacerbated as doctors and other health professionals will increasingly shift to organizations that understand the Quadruple Aim is central to long-term success in a post volume-centric healthcare delivery system.

A logical outcome of the old, flawed reimbursement model is a system that rewards “5 alarm fires” rather than “fire prevention”. Imagine if firefighters spent all day fighting fires as many doctors do — they’d also be burnt out. Further, they’d have a hard time attracting new firefighters when they observed the unsatisfying experience of veteran firefighters. Doctors practicing in organizations focused on the Quadruple Aim report very high levels of professional satisfaction and feel very gratified to be having such a positive impact on their patients’ lives. These Quadruple Aim focused organizations will ultimately win for their patients and clinicians.