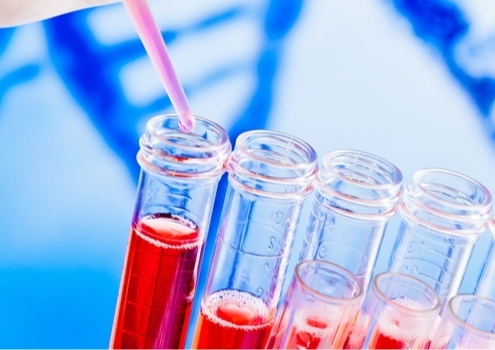 Cambridge, Massachusetts-based Thrive Earlier Detection released data from its DETECT-A study evaluating its blood test to screen for multiple types of cancers. The study was run by Johns Hopkins University and Geisinger Health, testing more than 10,000 women with no previous history of cancer.

The goal of the study was to identify multiple cancer types in people with no symptoms using a version of its CancerSEEK test developed in 2016. The results showed the test more than doubled the number of cancers that were first “screen-detected,” meaning seen through traditional screening techniques. Using the standard tests, 25% of the women were diagnosed with cancer, while with the Thrive test, the detection rate went to 52%.

The test identified cancers in 10 different organs, seven for which there are currently no standard-of-care screening. The test is able to identify cancers before clinically evident metastasis, with 65% that were identified being localized or regional. In combination with imaging, the blood test minimized false positive results with 99.6% specificity.

“This study is a seminal moment in cancer screening that advances the entire field,” said Christoph Lengauer, co-founder and chief innovation officer of Thrive. “For the first time, a blood test was utilized in a real-world setting and was able to more than double the number of cancers first identified through screening methods. We learned that it can be both complementary to existing standard-of-care screening tools, and a significant benefit for many types of cancers like ovarian, appendix and kidney, which do not have any current screening modalities.”

The study results were published in the journal Science and presented during the clinical plenary: Early Detection and CtDNA at the American Association for Cancer Research (AACR) Virtual Annual Meeting.

CancerSEEK is a so-called liquid biopsy that leverages machine learning. It analyzes 16 genes and nine proteins that are linked to multiple types of cancer. In DETECT-A, screening started by analyzing a blood samples to identify possible abnormal values for at least one biomarker. The test with abnormal values were invited back for confirmatory testing to determine if the identical biomarker was persistently abnormal. If appropriate, the patient was then reviewed by a Multidisciplinary Review Committee. If a cause for the abnormal biomarker that was not cancer could not be identified, imaging was conducted. Patients that had worrisome imaging results were referred to cancer specialists.

“For the very first time a multi-cancer blood test was utilized, in a real-world setting, to screen for multiple cancers,” said Dave Daly, chief executive officer of Thrive said in a video made for the announcement. “Any time you develop a screening platform you do not know how it’s going to work until you put it through its paces in the real world. And I’m excited to say the results are extraordinary.”

Currently, standard-of-care screening tests, such as mammography and colonoscopy, detect less than 30% of all incident cancers.

Daly stated, “Through this first-ever interventional study, the teams at Johns Hopkins University, Geisinger and Thrive have forged a new path and advanced the field of blood-based earlier cancer detection. Thrive is now one step closer to realizing our vision of providing a comprehensive approach to cancer screening, helping to shift the paradigm so that in the future, most cancers can be identified through earlier detection when there is the greatest opportunity for cure.”