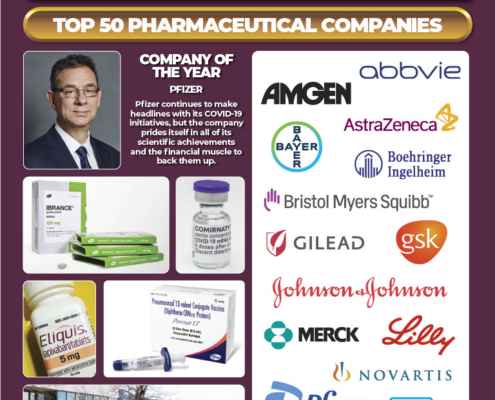 To be considered for the top 50 company list, companies must be independent and publicly traded (or make their full financial statements public) and must have the capability to develop, manufacture and market human prescription therapeutic drugs. Companies are ranked according to the name of the parent company. All companies are ranked in the main table by their worldwide 2020 prescription medicine revenue. This number was provided by company documents, unless otherwise noted. All other data in the tables represent the group’s consolidated financial figures, unless otherwise stated.

Four companies appear in this year’s Med Ad News top 50 listing that were not ranked in the magazine’s October 2020 annual report: Shanghai Pharmaceuticals Holding Co. at No. 38; CSPC Pharmaceutical Group Ltd. at No. 43, Incyte Corp. at No. 49, and Cipla Ltd. at No. 50.

Revenue: In tables that rank by revenue, each company is positioned according to worldwide revenue – either by prescription, healthcare or consolidated group, depending on the chart. The revenue figures include net sales of healthcare products, and potentially interest, dividends and other income when provided. Sales from discontinued operations have been included when applicable.

Earnings: This number represents the net income figure that appears in the income statement, after taxes and after nonrecurring and extraordinary charges. The net income figure is based on the consolidated sales of the group. Figures appearing in parentheses or with a minus sign indicate a loss.

Earnings per share: The number for earnings per common share is taken directly from company financial statements. This figure, based on consolidated results of the group, is adjusted for stock splits and stock dividends. Med Ad News editors used the diluted earnings per share figure when provided. Figures appearing in parentheses or with a minus sign indicate a loss.

Research and development: In the chart that ranks each top 50 company according to the research and development expenditure of prescription and/or healthcare products, the numbers were provided by the companies. Also provided is each company’s total R&D expenditure (consolidated) for all businesses. For some of the international companies, the prescription/healthcare R&D was not provided and thus the consolidated figure was used in their place; in these instances, the difference between the prescription/healthcare and consolidated R&D totals were not a large amount.

Total assets: This number represents the company’s year-end total assets as reported in the balance sheet statement, and is for the group.

Employees: This number represents the total number of employees for the year.

For the companies that report in yen, Med Ad News translated U.S. dollar amounts from yen at the March 2021 rate of ¥108.6991 to $1.00, except for Chugai, Kyowa Kirin, and Otsuka, whose numbers were translated at the 2020 average rate of ¥106.78 to $1.00. The top 50 companies that reported in yen were: Astellas, Chugai, Daiichi Sankyo, Eisai, Kyowa Kirin, Mitsubishi Tanabe, Ono, Otsuka, Shionogi, Sumitomo Dainippon, and Takeda. 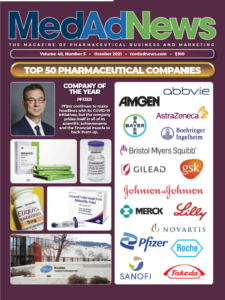 Selection Criteria for Company of the Year

The criteria for selecting the Company of the Year are based on a model developed by the editors of Med Ad News. Each one of the top 50 companies is evaluated on a number of categories, including these:

• Number of blockbuster drugs on the market

• Number of potential blockbuster drugs in the pipeline

• Number of new drugs to be launched in the near future

• Quality of management and vision

• Strength of the product pipeline

Past Companies of the Year