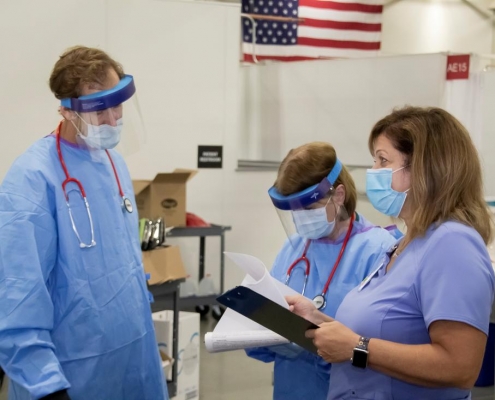 (Reuters) – U.S. coronavirus cases crossed the 9 million mark on Friday, rising by 1 million in two weeks as the world’s worst-affected country faces a resurgence in the pandemic just ahead of elections.

Cases are rising faster than ever before. The previous record for 1 million new cases was during a surge in infection in July and August – when it took 16 days. Now the country has recorded over 1 million cases in 14 days with no sign of the outbreak slowing. (Graphic: tmsnrt.rs/3jI3SCG)

On Thursday, the United States reported a record 91,254 new cases. On average, over 77,000 cases are being reported every day in the last seven days, double the level seen two months ago. Hospitalizations of COVID-19 patients are hitting records in 21 out of 50 states. Deaths are also trending higher and have reached nearly 230,000.

For every 10,000 people in the United States, over 272 coronavirus cases have been reported and about seven people have died, according to a Reuters analysis. In Europe there have been 127 cases and four deaths per 10,000 residents.

Texas has surpassed California as the worst-affected state in the United States, with Florida in third place.

Global coronavirus cases rose by more than 500,000 for the first time on Wednesday, a record one-day increase as countries across the Northern Hemisphere reported daily spikes. Many governments have started taking stronger measures to bring the spread of the virus under control.

More than a half million lives could be lost to COVID-19 across the United States by the end of February, according to researchers at the University of Washington’s Institute for Health Metrics and Evaluation (IHME).

U.S. President Donald Trump, who is seeking a second term on Tuesday, has been saying for weeks that the country is “rounding the turn,” even as new cases and hospitalizations soar.

The United States performed 7.7 million coronavirus tests last week, of which 6.3% came back positive, compared with 5.4% the prior week, according to data from The COVID Tracking Project, a volunteer-run effort to track the outbreak.

According to a Reuters analysis, the South region comprises nearly 44% of all the cases in the United States, with nearly 4 million cases in the region alone, followed by the Midwest, West and Northeast.

Reporting by Shaina Ahluwalia and Kavya B in Bengaluru; Editing by Lisa Shumaker