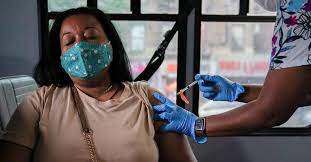 Approval of boosters for three COVID-19 shots being administered in the United States — those manufactured by Pfizer Inc (PFE.N) and partner BioNTech SE (22UAy.DE), Moderna Inc (MRNA.O) and Johnson & Johnson (JNJ.N) — is expected in mid-September, the report said, citing a person familiar with the plans.

Pfizer and BioNTech have already started the application process for the approval of its booster shot in people 16 and older, saying it spurs a more than three-fold increase in antibodies against the coronavirus. read more

Earlier this week, U.S. regulators granted full approval to Pfizer’s two-dose vaccine. Moderna said on Wednesday it has completed the real-time review needed for a full approval for its jab in people 18 and above. read more

White House spokeswoman Jen Psaki said in her daily briefing that any such development would be under the purview of the Centers for Disease and Control and Prevention (CDC). 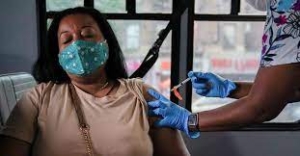 A person receives a dose of the Pfizer-BioNTech vaccine for the coronavirus disease (COVID-19), at a mobile inoculation site in the Bronx borough of New York City, New York, U.S., August 18, 2021. REUTERS/David ‘Dee’ Delgado

The CDC said the government’s plan to administer booster shot depends on pending action from the Food and Drug Administration and recommendation to it from the Advisory Committee on Immunization Practices.

The FDA, however, reiterated its joint statement from last week that said the government was gearing up to roll out the third shot from mid-September to Americans who had their initial course of two-dose vaccines made by Moderna and Pfizer more than eight months ago.

The rollout would start if the FDA and the CDC decide that boosters are needed, U.S. officials had said. read more

Reporting by Manojna Maddipatla in Bengaluru; Editing by Arun Koyyur