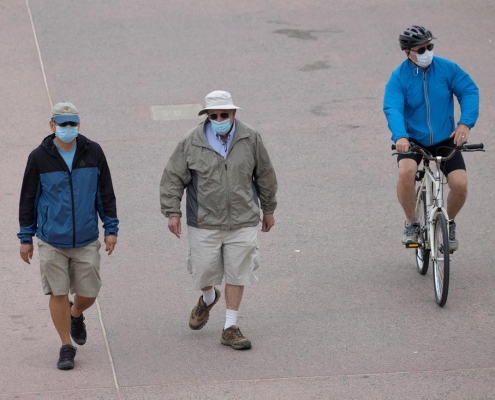 (Reuters) – The United States reported more than 55,000 new COVID-19 cases on Thursday, a new daily global record for the coronavirus pandemic, as infections rose in a majority of states.

A surge in coronavirus cases over the past week has put President Donald Trump’s handling of the crisis under the microscope and led several governors to halt plans to reopen their states after strict lockdowns.

Coronavirus cases are rising in 37 out of 50 U.S. states including Florida, which confirmed more than 10,000 new cases on Thursday. That marked the state’s largest daily spike so far and a level that exceeded single-day tallies from any European country at the height of the outbreak there.

California, another epicenter, saw positive tests climb 37% with hospitalizations up 56% over the past two weeks.

Texas Governor Greg Abbott, a Republican who has previously resisted calls to make face masks mandatory, on Thursday ordered them to be worn in all counties with over 20 coronavirus cases.

“In the past few weeks, there has been a swift and substantial spike in coronavirus cases,” Abbott said in a videotaped message. “We need to refocus on slowing the spread. But this time, we want to do it without closing down Texas again.”

New infections were rising in 37 out of 50 U.S. states in the past 14 days compared with the two weeks prior, according to a Reuters analysis. The United States has now recorded nearly 129,000 deaths, nearly a quarter of the known global total.

The wave of new cases has several governors halting or back-pedaling on plans to reopen their states after months of strict lockdowns, closing beaches and canceling fireworks displays over the upcoming Independence Day weekend.

‘STILL IN THE FIRST WAVE’

“We are not out of this crisis. We are still in the first wave of this crisis. It requires some level of personal responsibility,” California Governor Gavin Newsom, a Democrat, said at a daily briefing on the pandemic.

Earlier on Thursday, Kansas required face coverings after a 46% spike in infections there last week.

The sweeping business shutdowns earlier in the pandemic devastated the U.S. economy and threw millions of Americans out of work, leaving governors reluctant to take such draconian steps again, even if the lifting of restrictions likely touched off the new outbreak.

A U.S. Labor Department report out Thursday showed the re-openings had a dramatic impact on hiring, with the United States creating jobs at a record pace in June. However, employment remains 14.7 million jobs below pre-pandemic levels.

“Today’s announcement proves that our economy is roaring back,” Trump told reporters at the White House.

“More than ever, we’re concerned about the worsening health situation and its impact on the burgeoning recovery. Rebounding mobility and poor use of protective equipment will make for a dangerous summer cocktail,” Oxford Economics analyst Gregory Daco wrote.

Joe Biden, Trump’s expected rival for the presidency in November, slammed him on Thursday. 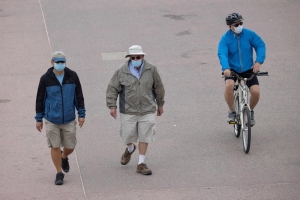 FILE PHOTO: People wear face masks as they use the beach boardwalk during the outbreak of the coronavirus disease (COVID-19), in Huntington Beach, California, U.S., July 1, 2020. REUTERS/Mike Blake/File Photo

“Quit claiming victory with almost 15 million Americans still out of work because of the crisis. Quit ignoring the reality of this pandemic and the horrifying loss of American life,” Biden said in a campaign speech.

Former Republican presidential candidate Herman Cain, who attended a Trump rally last month in Tulsa, Oklahoma, has been hospitalized with COVID-19, according to his Twitter account. The statement did not say where he was infected.

Eight members of the campaign’s staff who were in Tulsa for the June 20 rally have also tested positive.

U.S. Vice President Mike Pence was in Florida on Thursday, where he met with Governor Ron DeSantis and expressed support for the governor’s “prudent steps” to slow the spread of the virus.

Earlier, Pence said he and Trump supported decisions to pause reopenings but added that he saw no need for a national mandate for face coverings.

(GRAPHIC: Tracking the novel coronavirus in the U.S. – here)