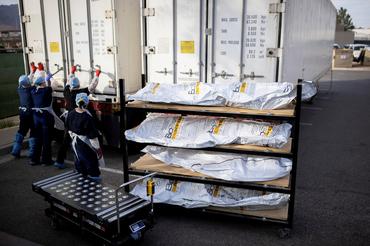 (Reuters) – The United States recorded 10,000 coronavirus deaths and over 1.1 million new cases last week, although state and health officials have said the Thanksgiving holiday likely caused numbers to be under-reported.

They said that figures for cases and deaths this week may be abnormally high due to a backlog of data from last week.

Hospitals, which were not closed due to holidays, may provide the most accurate data for last week. Hospitalized COVID-19 patients reached a record high of nearly 93,000 on Sunday, up 11% from last week and double the number reported a month ago, according to the Reuters analysis.

Cases rose by 91% in Washington state last week, the biggest percentage increase in the country, followed by California at 31% and New York with a 25% increase. 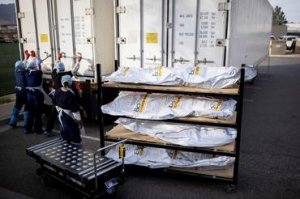 Illinois reported 831 COVID-19 deaths last week, the highest for any state, followed by Texas with 806 deaths.

(Open here in an external browser for state-by-state details)

Across the United States, 9.8% of tests came back positive for the virus for a third week in a row, according to data from The COVID Tracking Project, a volunteer-run effort to track the outbreak. Out of 50 states, 29 had positive test rates above 10%. The highest rates were Iowa at 50%, Idaho at 44% and South Dakota at 41%.

The World Health Organization considers positive test rates above 5% concerning because it suggests there are more cases in the community that have not yet been uncovered.