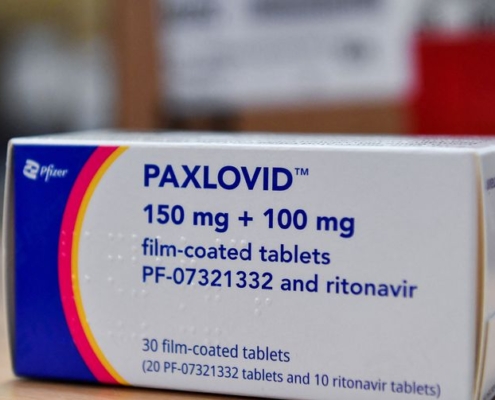 As U.S. COVID-19 cases rise, so does demand for antivirals

WASHINGTON, May 17 (Reuters) – Rising COVID-19 cases are driving up the use of therapeutics, with Pfizer Inc’s (PFE.N) oral antiviral treatment Paxlovid seeing a 315% jump over the past four weeks, U.S. health officials said on Tuesday.

The increase in U.S. cases and hospitalizations is starting to affect recommendations on behavior, with New York City, the nation’s most populous city, advising stricter mask usage but stopping short of new mandates. Apple (AAPL.O) has scrapped return to office plans. read more

“But we now have better treatments and many of those people will leave the hospital vertically rather than horizontally.”

The United States is averaging nearly 97,000 new cases a day, up from about 73,000 a week ago, according to a Reuters tally. Cases have been gradually rising since hitting a recent low of 30,000 new infections a day in late March.

The U.S. Centers for Disease Control and Prevention on Tuesday estimated that about half of infections last week were from the BA.2.12.1 sublineage of the Omicron variant, which has been on the rise since mid-April and is already the dominant strain along much of the East Coast.

“The other thing that’s going on is that we’re providing the opportunity for spread; we’ve taken off our masks, we’re going back to group activities both in business and for recreation,” said Schaffner.

“Going forward, we will have to figure out when is the impact of this virus sufficient such that we might have to start putting our masks back on and doing more social distancing. That sort of discussion is going on in New York right about now,” he added.

New York City raised its COVID-19 alert level to high on Tuesday with its health department strongly advising wearing masks in all public indoor settings for everyone and in crowded outdoor settings for those older than 65 or at high risk.

Based on population, the U.S. Northeast has seen the greatest rise in new cases in the last seven days, led by Connecticut, Rhode Island and Massachusetts.

There are currently nearly 20,000 people hospitalized across the country, up from 16,500 last week, according to a Reuters tally. Hospitalizations have also been steadily rising from a recent low of 12,000 in mid-April.

Based on population, the states with the most hospitalizations are Maine, New York and Delaware.

Deaths, a lagging indicator, have held fairly steady at a daily average between of 300 to 500. COVID-19 has killed more than a million U.S. residents since the start of the pandemic.

Nearly 115,000 courses of Paxlovid were dispensed during the first week of May, the Department of Health and Human Services said on Tuesday.

A total of 668,954 courses were administered out of the available supply of 3.3 million, HHS data show.

Paxlovid is approved to keep high-risk individuals with COVID-19 from becoming seriously ill. It is meant to taken for five days beginning shortly after symptom onset.

The White House said last month it was aiming to address unexpectedly light demand by expanding access to treatments like Paxlovid by doubling the number of locations at which they are available. read more

“In recent weeks we’ve gone from 20,000 sites with Paxlovid to approximately 35,000 and we’ll keep working to increase availability,” the senior health official said, adding that 88% of the population lived within 5 miles (8 km) of a site.

Health officials face a challenge in convincing the public that repeat vaccinations are beneficial, said Schaffner.

“We’ll have to keep vaccinating because it would appear that to one degree or another over a period of months protection against serious disease begins to wane,” he said.

The U.S. Food and Drug Administration on Tuesday authorized the use of a booster shot of Pfizer and BioNTech’s vaccine for children aged 5 to 11, making everyone 5 or older eligible for a third shot. read more

The government has shipped around 360 million coronavirus tests to homes nationwide, the official said, and has opened a third round of ordering on its COVIDtest.gov website on Monday to allow additional requests.