NEW YORK (Reuters) – U.S. states claimed they are owed $2.2 trillion to address harm from OxyContin maker Purdue Pharma LP’s alleged role in America’s opioid epidemic, accusing the drugmaker in new filings of pushing prescription painkillers on doctors and patients while playing down the risks of abuse and overdose. 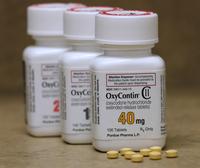 In filings made as part of Purdue’s bankruptcy proceedings that were disclosed on Monday, the states said Purdue, backed by the wealthy Sackler family, contributed to a public health crisis that has claimed the lives of roughly 450,000 people since 1999 and caused strains on healthcare and criminal justice systems. The filings cited more than 200,000 deaths in the U.S. tied directly to prescription opioids between 1999 and 2016.

Purdue filed for bankruptcy in 2019 under pressure from more than 2,600 lawsuits brought by cities, counties, states, Native American tribes, hospitals and others. The lawsuits said the company, and in some cases the Sacklers, used deceptive marketing and took other improper steps to flood communities with prescription opioids.

The company and family have denied the allegations and pledged to help combat the opioid epidemic, including by providing addiction treatment drugs and overdose reversal medications under development.

In response to the state claims, Purdue said it continues to work toward resolving litigation and emerging from bankruptcy, and that it is typical for claims from various creditors to be “filed in amounts substantially larger than what is ultimately allowed by the court.”

Sackler representatives did not immediately respond to requests for comment.

Purdue and the Sacklers have pointed to fentanyl and heroin as more significant culprits in the opioid crisis. States in their filings, though, pointed to National Institute on Drug Abuse research estimating that about 80% of heroin abusers previously took prescription opioids.

In addition to the assertions from states, Purdue faces claims exceeding $18 billion from the U.S. Justice Department on account of potential penalties resulting from criminal and civil investigations.

In filings tied to Purdue’s bankruptcy case, federal prosecutors said Purdue contributed to false claims being made to federal healthcare insurance programs by allowing doctors to write medically unnecessary opioid prescriptions that were at times tainted by illegal kickbacks, according to a person familiar with the matter.

The Justice Department has declined to comment on the claims.

Claims from states and federal prosecutors are being processed after being filed just before a July 30 deadline set by a U.S. bankruptcy judge. While they will collectively exceed trillions of dollars, the filings are in many cases placeholders as opposed to roadmaps for how much money Purdue will ultimately pay its creditors, the bulk of which are U.S., state and local governments.

Purdue is only worth a bit more than $2 billion if liquidated. The company values a proposal to settle litigation, which includes providing addiction treatment and overdose-reversing drugs, at more than $10 billion. The Sacklers would contribute $3 billion and cede control of Purdue, with the company becoming a trust run on behalf of plaintiffs.

Those financial realities underscore that Purdue does not have enough money to satisfy the myriad claims against it.

States and other litigants are in talks to determine how to allocate proceeds from Purdue’s bankruptcy estate as part of the company’s attempted reorganization. Many states, including Massachusetts, New York and Connecticut, have opposed Purdue’s settlement offer, insisting the Sacklers contribute more money and reveal more details about their finances.