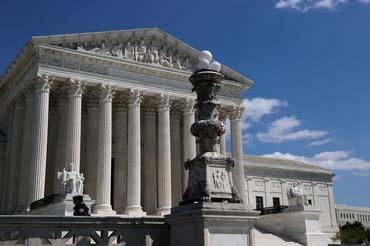 WASHINGTON (Reuters) – The U.S. Supreme Court on Wednesday considered a bid by Donald Trump’s administration to implement rules allowing employers to obtain religious exemptions from an Obamacare requirement that health insurance that they provide to employees covers women’s birth control.

The justices began a scheduled one-hour argument by teleconference, their third this week in this new format prompted by the coronavirus pandemic.

At issue is a challenge by the states of Pennsylvania and New Jersey to the administration’s 2018 rule that permits broad religious and moral exemptions to the contraception mandate of the 2010 Affordable Care Act, commonly called Obamacare, and expands accommodations already allowed.

Justice Ruth Bader Ginsburg, at 87 the court’s oldest member, participated in the argument from Baltimore after being hospitalized for non-surgical treatment for an infection arising from a gallstone in her cystic duct. She also is due to take part in a second case before the court on Wednesday, a challenge involving a telephone consumer protection law.

Early in the argument, Ginsburg asked a lengthy question of Solicitor General Noel Francisco in which she said Trump’s administration had “tossed entirely to the wind what Congress considered to be essential, that women be provided this service, with no hassle and no cost to them.”

The administration has asked the Supreme Court, which has a 5-4 conservative majority that includes two Trump appointees, to reverse a nationwide injunction issued by a lower court blocking the rule.

The administration is joined in the litigation by the Little Sisters of the Poor, a Roman Catholic order of nuns that is one of the groups seeking an exemption for its employees.

Rules implemented under Trump’s Democratic predecessor Barack Obama exempted religious entities from the mandate and a further accommodation was created for religiously affiliated nonprofit employers, which some groups including the Little Sisters of the Poor objected to as not going far enough.

The contraceptive mandate under the law, which was signed by Obama in 2010 and has faced Republican efforts to repeal it ever since, requires that employer-provided health insurance include coverage for birth control with no co-payment. Previously, many employer-provided insurance policies did not offer this coverage. 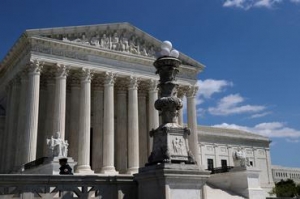 FILE PHOTO: A police officer is mostly alone on the plaza in front of the U.S. Supreme Court building during the coronavirus disease (COVID-19) outbreak in Washington, U.S., April 15, 2020. REUTERS/Jonathan Ernst

The blocked Trump rule would allow any nonprofit or for-profit employer, including publicly traded companies, to seek an exemption on religious grounds. A moral objection can be made by nonprofits and companies that are not publicly traded. The Trump administration exemption also would be available for religiously affiliated universities that provide health insurance to students.

The legal question is whether Trump’s administration had the legal authority to expand the exemption under both the Obamacare law itself and another federal law, the Religious Freedom Restoration Act, which allows people to press religious claims against the federal government.

The Philadelphia-based 3rd U.S. Circuit Court of Appeals last year upheld a nationwide injunction issued by a district court judge in the lawsuit that blocked implementation of the exemptions.

The justices addressed the question of religious accommodations to the Obamacare contraception mandate once before. In 2016, they sidestepped a decision on previous rules issued under Obama, sending the dispute back to lower courts.

Reporting by Lawrence Hurley; Additional reporting by Andrew Chung; Editing by Will Dunham