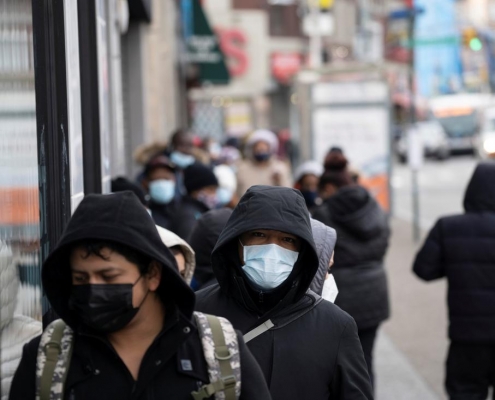 NEW YORK (Reuters) – More Americans were hospitalized with COVID-19 on Wednesday than at any time since the pandemic began, as total coronavirus infections crossed the 21 million mark, deaths soared across much of the United States and a historic vaccination effort lagged.

U.S. COVID-19 hospitalizations reached a record 130,834 late on Tuesday, according to a Reuters tally of public health data, while 3,684 reported fatalities was the second-highest single-day death toll of the pandemic.

That appalling toll meant that on Tuesday someone died from COVID-19 every 24 seconds in the United States. With total deaths surpassing 357,000, one in every 914 U.S. residents has died from COVID-19 since the pandemic began, according to a Reuters analysis.

In hard-hit California, public health authorities ordered hospitals in more than a dozen southern and central counties overwhelmed with COVID-19 patients to suspend elective surgeries for at least three weeks.

The order, issued late on Tuesday by the state’s Department of Public Health, applies to 14 counties, including Los Angeles, Orange and San Diego counties, where hospital critical care capacity has been severely stretched. 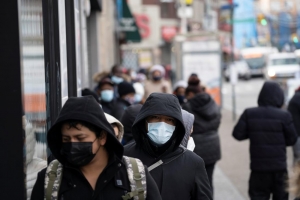 People wait in line at a CityMD Urgent Care facility to get tested for the coronavirus disease (COVID-19) in the Bronx borough of New York City, New York, U.S., January 6, 2021. REUTERS/David ‘Dee’ Delgado

Total U.S. COVID-19 cases surpassed the 21 million mark on Wednesday, and, with many healthcare systems approaching a breaking point, pressure mounted on state and local officials to speed up distribution of the two authorized vaccines from Pfizer Inc with partner BioNTech SE and Moderna Inc.

The lack of a federal blueprint for the crucial final step of getting the vaccines into tens of millions of arms has left state and local officials in charge of the monumental effort, creating a patchwork of different plans across United States.

“We will use all resources and personnel needed,” Cooper said in a statement.

“At the current pace of allocation,” Hogan said, the state expects to be able to start vaccinating the 1b priority group – people age 75 and older and frontline essential workers – by late January.

In New York City, where Mayor Bill de Blasio and Governor Andrew Cuomo have sparred over slow vaccine administration, officials said on Wednesday the city was ramping up its “vaccine hubs,” which would include 15 locations by Jan. 16, five “mega sites” among them. The sites will have the capacity to vaccinate 100,000 New Yorkers a week, official said.

The ambitious goal comes as the city administered roughly 10,000 shots on Tuesday, according to data posted on Wednesday.

De Blasio also said at a news briefing that home health aides and some members of the New York Police Department could receive the vaccine for the first time on Wednesday.

After earlier this week laying blame on local officials for the sluggish pace of vaccinations at some New York hospitals, Cuomo said on Wednesday that the rate among hospital staff statewide has tripled to 30,000 inoculations per day since Monday.

In Florida, which set a new single-day record of coronavirus cases, Ron DeSantis announced that the Hard Rock stadium in Miami’s metropolitan area was converting its testing operations into a vaccination center.

Another 3 million doses of the two vaccines were sent to U.S. states on Tuesday, acting Secretary of Defense Christopher Miller said in a statement, bringing the total to more than 19 million doses in 21 days, only a fraction of which have been administered so far.

Both authorized vaccines require two doses three or four weeks apart. Healthcare workers in several states this week began getting their second dose of the Pfizer/BioNTech vaccine, which was approved before the Moderna shot.

The U.S. government was considering halving the doses of Moderna’s vaccine to free up supply for more vaccinations. But scientists at Moderna and the National Institutes of Health said it could take two months to study whether the halved doses would be effective.

A massive global vaccination campaign will be needed to establish a level of herd immunity that could put an end to the devastating pandemic raging across much of the United States and many other countries, with more highly transmissible variants of the virus cropping up.

A variant that has swept through the United Kingdom has been reported in at least five U.S. states, National Institutes of Health Director Francis Collins said in an interview with the Washington Post on Wednesday.

“We have now seen that same UK virus in the U.S. in at least five states, and I would be surprised if that doesn’t grow pretty rapidly,” Collins said, adding, however, that it doesn’t seem to be more severe.