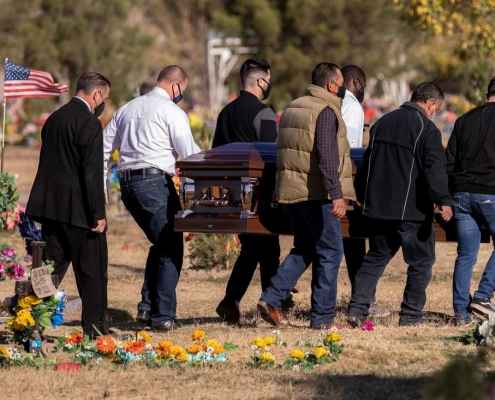 U.S. vaccine near, but deaths rising by 9/11 proportions each day

WASHINGTON (Reuters) -A mounting U.S. death toll has tempered enthusiasm about a coming COVID-19 vaccine with 9/11-like fatalities projected every day for the months ahead, even with a rapid rollout of inoculations, which could start as soon as Monday.

Another 2,902 U.S. deaths were reported on Thursday, a day after a record 3,253 people died, a pace projected to continue for the next two to three months until the vaccine can be widely distributed.

Those daily tolls are roughly equivalent to the 2,996 killed in the attacks of Sept. 11, 2001, and greater than the 2,403 killed in the 1941 attack on Pearl Harbor – traumatic events that reshaped the United States for years.

“Probably for the next 60 to 90 days, we’re going to have more deaths per day than we had on 9/11 or we had at Pearl Harbor,” Dr. Robert Redfield, director of the U.S. Centers for Disease Control and Prevention (CDC), told the Council on Foreign Relations on Thursday.

“The reality is the vaccine approval this week is not going to really impact that, I think, to any degree for the next 60 days,” Redfield said. 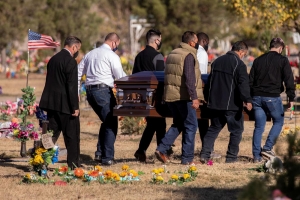 A family carries a coffin at Our Lady of Mount Carmel Cemetery, amid a new surge of deaths due to coronavirus disease (COVID-19) in El Paso, Texas, U.S. November 25, 2020. Picture taken November 25, 2020. REUTERS/Ivan Pierre Aguirre

Moving with unprecedented speed, the U.S. Food and Drug Administration (FDA) on Friday was on the cusp of approving emergency use of the coronavirus vaccine developed by Pfizer Inc with its German partner BioNTech.

“The FDA informed Pfizer that they do intend to proceed towards an authorization for their vaccine,” Health and Human Services Secretary Alex Azar told ABC News on Friday.

“We will work with Pfizer to get that shipped out so we could be seeing people getting vaccinated Monday or Tuesday,” Azar said.

Britain, Bahrain and Canada have already approved the Pfizer vaccine, and the U.S. advisory panel is due to review a second vaccine, from Moderna Inc, next week. Other vaccine candidates are in the works.

While most vaccines take years to develop, the Pfizer vaccine arrives less than a year after the illness was traced to a market in Wuhan, China, in December of last year.

Chinese officials shared the genetic sequence of the novel coronavirus with the World Health Organization on Jan. 12, triggering the international race toward a vaccine.

“It’s not going to be like a light switch on and off. It’s going to be more like a dimmer switch,” said Dr. Mark Mulligan, director of NYU Langone Health Vaccine Center and a lead investigator for the Pfizer trials.

But any American who wants a vaccine should be able to get one by May or June, Assistant U.S. Health Secretary Brett Giroir told Fox News on Friday.

States will determine who gets the vaccine first and were likely to focus on healthcare workers and people in long-term care facilities, followed by the elderly, people with chronic conditions and first responders, Giroir said.

Then there is the American skepticism about vaccines, with only 61% saying they are open to getting vaccinated, according to a Reuters/Ipsos poll.

In the meantime, grim statistics continue to pile up as the United States recorded more than 200,000 cases per day for four straight days with another 220,815 cases on Thursday, according to a Reuters tally of official data.

The United States has so far reported about 15.6 million cases and 292,642 deaths by Thursday.

Deaths are projected to reach 502,000 by April 1, according to an influential model by the University of Washington’s Institute for Health Metrics and Evaluation.

The institute revised that number down by about 37,000 on Thursday with the release of more detailed information about the vaccine and other factors.