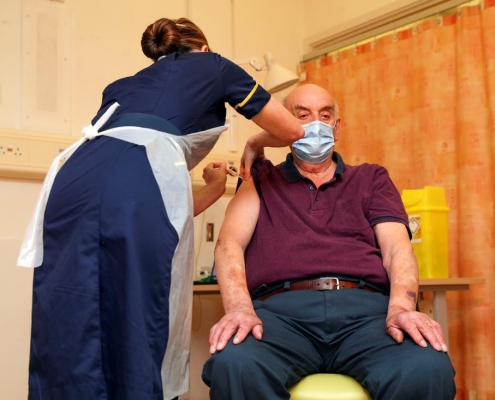 LONDON (Reuters) – Britain became the first country to vaccinate its population with Oxford University and AstraZeneca’s COVID-19 shot on Monday, but Prime Minister Boris Johnson was set to tighten restrictions in England in a bid to slow the spread of cases.

Johnson will make a televised address at 8 p.m. (2000 GMT) and parliament will be recalled on Wednesday.

“The spread of the new variant of COVID-19 has led to rapidly escalating case numbers across the country,” a spokesman from the prime minister’s office said.

“The prime minister is clear that further steps must now be taken to arrest this rise and to protect the NHS (National Health Service) and save lives. He will set those out this evening.”

Against the ominous backdrop of record daily cases, Britain touted a scientific “triumph” as dialysis patient Brian Pinker, 82, became the first person to get the Oxford/AstraZeneca shot outside of a trial.

“I am so pleased to be getting the COVID vaccine today and really proud that it is one that was invented in Oxford,” said Pinker, a retired maintenance manager, just a few hundred metres from where the vaccine was developed.

Britain is grappling with the world’s sixth highest death toll and one of the worst economic hits from the COVID-19 crisis. More than 75,000 people in the United Kingdom have died from COVID-19 within 28 days of a positive test.

It was the first country to roll out the vaccine developed by Pfizer and Germany’s BioNTech almost a month ago, and is prioritising getting a first dose of vaccines to as many people as possible over giving second doses.

Some experts say they are worried about such an approach.

Two new variants of the coronavirus are complicating the COVID-19 response and Britain has seen a resurgence in cases to new daily highs.

UK scientists have expressed concern that COVID-19 vaccines being rolled out may not be able to protect against a new variant of the coronavirus that emerged in South Africa and has spread internationally.

“If you look at the numbers, there’s no question that we’re going to have to take tougher measures,” Johnson said on a visit to see health workers receiving the Oxford vaccine.

ITV News said the toughest Tier 4 level of restrictions, which currently cover much of England, will be imposed across the country and schools would be closed. 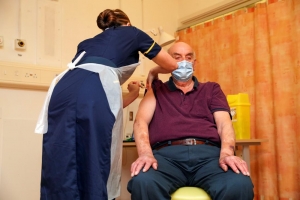 Professor Andrew Pollard, Director of the Oxford Vaccine Group (OVG), and a professor of Paediatric Infection and Immunity receives the Oxford University/AstraZeneca COVID-19 vaccine from nurse Sam Foster at the Churchill Hospital in Oxford, Britain January 4, 2021. Steve Parsons/Pool via REUTERS

“It is no exaggeration to say that I am more concerned about the situation that we face now than I have been at any time since March,” she said.

Britain has administered more than a million COVID-19 vaccines – more than the rest of Europe put together, Health Secretary Matt Hancock said, declaring it a triumph of British science.

Johnson’s government has secured 100 million doses of the Oxford/AstraZeneca vaccine which can be stored at fridge temperatures between two to eight degrees, making it easier to distribute than the Pfizer shot.

Six hospitals in England are administering the first of around 530,000 doses Britain has ready. The programme will be expanded to hundreds of other British sites in coming days, and the government hopes it will deliver tens of millions of doses within months.

The U.S. Centers for Disease Control and Prevention said it had administered 4.2 million first doses of COVID-19 vaccines as of Saturday morning and distributed 13.07 million doses.

More than a tenth of Israel’s population have had a vaccine and it is now administering more than 150,000 doses a day.

Germany and Denmark are looking into the possibility of delaying administering a second dose of the Pfizer vaccine to make scarce supplies go further, after a similar move by Britain.

Britain became the first Western country to approve and roll out a COVID-19 vaccine, although it is behind Russia and China which have been inoculating their citizens for months.