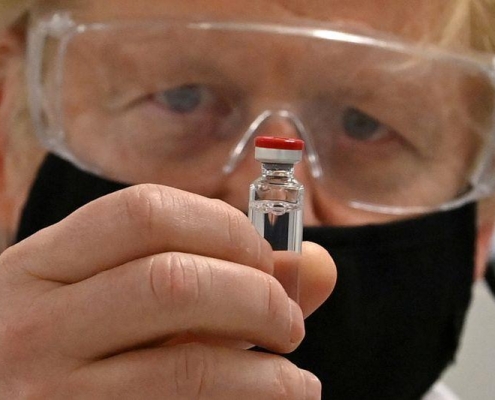 LONDON (Reuters) – Britain on Wednesday became the first country in the world to approve the coronavirus vaccine developed by Oxford University and AstraZeneca, hoping that rapid action will help it stem a record surge of infections driven by a highly contagious form of the virus.

Prime Minister Boris Johnson’s government, which has ordered 100 million doses, had already fast-tracked approval of a vaccine developed by Pfizer of the United States and Germany’s BioNTech, and administered hundreds of thousands of shots weeks ahead of European Union countries and the United States.

Though cheaper and easier to distribute than rival vaccines, the Oxford/AstraZeneca shot has been plagued with questions about its most effective dosage ever since data published last month showed some surprising results.

While other regulators have taken a more cautious approach, Britain’s MHRA was at pains to say it had resolved early doubts and – unexpectedly – that it had found an 80% success rate for the administration of two full doses, three months apart, higher than the average that the developers themselves had found. 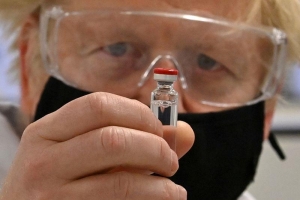 The government plans to take advantage by giving the first dose to a larger number of people most at risk from COVID-19 before starting to administer the boosters. An advisory body recommended doing the same with the Pfizer shot.

Jeremy Farrar, one of Britain’s leading public health experts, said the approval was to be celebrated, but urged continuing scrutiny, saying:

“We will … need to continue tracking and improving our understanding of how long the protection lasts and whether (the vaccines) can prevent transmission. This would be best achieved by a randomised trial on the timing of the second dose.”

Britain has already registered over 70,000 deaths from COVID-19. On Tuesday it reported a record one-day jump of 53,135 new coronavirus infections, and it fears hospitals will soon become overstretched in their peak winter months.

The AstraZeneca/Oxford vaccine could also be a game-changer for global immunisation. Countries with relatively basic health infrastructure have high hopes for a shot that, unlike Pfizer’s, can be stored and transported under normal refrigeration, rather than supercooled to -70 degrees Celsius (-94 Fahrenheit).

India’s Serum Institute of India (SII), the world’s biggest producer of vaccines, has made about 50 million doses of the Oxford vaccine, and experts at India’s drug regulator were meeting on Wednesday to consider an emergency approval, two sources said. Chile is also interested.

Helen Fletcher, Professor of Immunology at the London School of Hygiene and Tropical Medicine, hailed a “turning point” for the pandemic, which has already killed 1.7 million people around the world, sown chaos through the global economy and upended normal life for billions.

“With more than 30 supply agreements and partner networks established globally, the Oxford/AstraZeneca vaccine could slow the pandemic and should save many lives within the next year.”

The EU regulator says it has not yet received full data on the AstraZeneca shot and is unlikely to be able to approve it next month – although Germany’s top vaccine official said that a rolling review of data meant a quick decision should be possible.

The UK’s COVID-19 vaccine chair, Wei Shen Lim, said a single dose of Oxford/AstraZeneca’s vaccine was around 70% effective from 21 days until a second dose was given at 12 weeks.

The UK Medicines and Healthcare products Regulatory Agency (MHRA) cleared up one doubt raised by the Oxford data, saying that a 90% success rate for a half-dose followed by a full dose had not stood up to analysis.

However, Munir Pirmohamed, chair of a government working group on COVID-19 vaccines and involved in the approval, said that, when two full doses were given three months apart, “effectiveness was high, up to 80% … which is the reason for our recommendation”.

A Reuters investigation detailed how the apparently more effective dosing regime was the result of a miscalculation.

AstraZeneca Chief Executive Pascal Soriot told BBC radio that Britain should be able to vaccinate tens of millions of people by the end of the first quarter. The firm said it expected the vaccine to work against the new variant.

Health Secretary Matt Hancock told Sky News that he was “highly confident that we can get enough vulnerable people vaccinated by the spring that we can now see our route out of this pandemic”.

Explainer: How does AstraZeneca’s vaccine compare with Pfizer-BioNTec...
Scroll to top