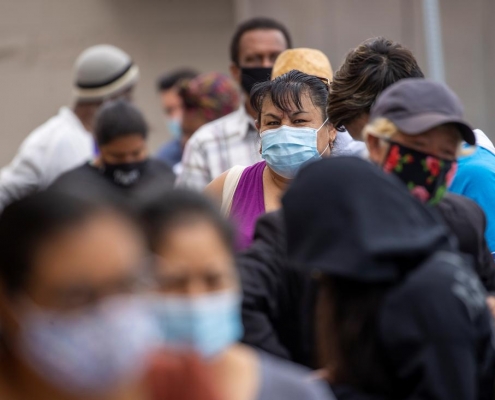 WASHINGTON (Reuters) – Nearly 300,000 Americans could be dead from COVID-19 by Dec. 1, University of Washington health experts forecast on Thursday, although they said 70,000 lives could be saved if people were scrupulous about wearing masks.

The latest predictions from the university’s widely cited Institute for Health Metrics and Evaluation (IHME) comes as top White House infectious disease advisers warned that major U.S. cities could erupt as new coronavirus hot spots if officials there were not vigilant with counter-measures.

“We’re seeing a rollercoaster in the United States. It appears that people are wearing masks and socially distancing more frequently as infections increase, then after a while as infections drop, people let their guard down,” Dr Christopher Murray, director of the IHME, said in announcing the university’s revised forecast.

The U.S. death toll from COVID-19 stands at more than 159,000, the most of any country in the world, with nearly 4.9 million known cases. (Open tmsnrt.rs/2WTOZDR in an external browser for a Reuters interactive graphic)

The IHME said infections were falling in the former epicenters of Arizona, California, Florida, and Texas, but rising in Colorado, Idaho, Kansas, Kentucky, Mississippi, Missouri, Ohio, Oklahoma, Oregon, and Virginia. Those findings are consistent with Reuters tallies.

Ohio Governor Mike DeWine, a Republican, on Thursday said he had tested positive for the virus ahead of a planned meeting with President Donald Trump, but had experienced no symptoms of the illness. He later said a second test came back negative and his wife and staff members had likewise tested negative.

Tennessee and North Carolina reported record single-day increases in deaths on Thursday with 42 and 73, respectively.

The U.S. outbreak, once centered around densely populated New York City, has since infected communities from coast to coast. Experts believe that spread has been driven in part by summer vacation travel.

“This is a predictor of trouble ahead,” Dr Anthony Fauci, the nation’s top infectious diseases official, told CNN.

Fauci was speaking after the White House coronavirus task force coordinator, Dr Deborah Birx, identified new areas of concern during a telephone call with state and local officials on Wednesday.

Baltimore and Atlanta remain at a “very high level,” as well as Kansas City, Portland, Omaha and California’s Central Valley, Birx said on the call, a recording of which was obtained by the journalism nonprofit Center for Public Integrity. 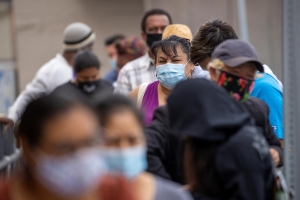 FILE PHOTO: Customers wait in line to shop for food at a Food 4 Less grocery store, during the outbreak of the coronavirus disease (COVID-19), in Los Angeles, California, U.S., August 5, 2020. REUTERS/Mike Blake

On the positive side, medical professionals have a better understanding of what they are dealing with, said Dr Khalilah Gates, a pulmonary and critical care specialist at Northwestern Memorial Hospital in Chicago.

“We don’t know all of it, but it’s not the fear of the unknown anymore,” she told Reuters.

Trump has urged state and local authorities to re-open public schools for in-person learning and Fauci has said children should be sent back to class as soon as possible.

But many school districts nationwide, including two of the largest, Los Angeles and Chicago, have opted for online instruction.

The decision to reopen schools took into account the “inevitable moment” that the virus would be detected and contact tracing plans triggered, Childress said.

“We’re going to have some more positive cases. We know it will happen,” he said.

Although the number of Americans seeking jobless benefits fell last week, a staggering 31.3 million people were receiving unemployment checks in mid-July. Other data on Thursday showed a 54% surge in job cuts announced by employers in July.

The State Department on Thursday lifted an advisory from March that U.S. citizens should avoid all international travel due to the pandemic. But American travelers are still restricted or banned in many parts of the world, including the European Union and Canada.