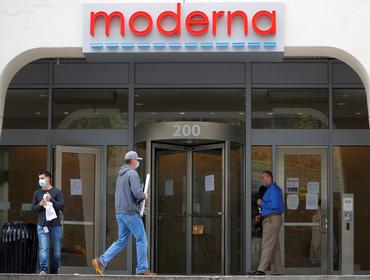 NEW YORK (Reuters) – The United States is tying payments for COVID-19 vaccines to timing milestones for production and approval, according to public documents and a Trump administration official, putting pressure on drugmakers including Moderna Inc (MRNA.O) to meet ambitious targets.

In a deal with Moderna announced this week, federal agencies negotiated a sliding scale of payments. The Cambridge, Massachusetts, biotech’s $1.5-billion deal pays out in full if its vaccine receives regulatory clearance by January 31, 2021, according to filings. It receives $1.2 billion, if it falls short of that timing goal.

Moderna also receives $600 million when it can demonstrate it has built out industrial-scale manufacturing capabilities for its vaccine, even if that happens before the drug is authorized by regulators, the filings show.

U.S. government payments to other drugmakers are also conditional on launching clinical trials no later than early fall and building out manufacturing capabilities by the end of the year, two senior administration officials told Reuters, adding that terms varied by company.

The deal terms add financial risk for the drugmakers and increase pressure for speed that has worried some public health advocates. HHS and Moderna declined comment; other drugmakers had no immediate comment on Friday.

Other drugmakers did not publicly reveal details on the specific terms of their agreements with the U.S. government, though Pfizer has said its deal with the government for its joint vaccine with BioNTech only pays out if it receives regulatory approval.

Analysts already have said drugmakers may struggle to recoup billions invested in vaccine development at U.S. treatment prices that so far range from $20 to $42 per person. 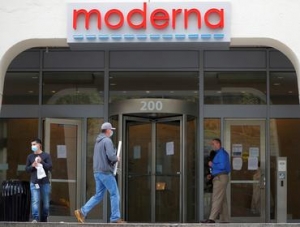 FILE PHOTO: A sign marks the headquarters of Moderna Therapeutics, which is developing a vaccine against the coronavirus disease (COVID-19), in Cambridge, Massachusetts, U.S., May 18, 2020. REUTERS/Brian Snyder/File Photo

Administration officials have said they expect the U.S. governments’ Operation Warp Speed vaccine development program to deliver an inoculation by the end of the year. President Donald Trump has said he thinks a vaccine could be available before the November 3 presidential election.

To obtain regulatory approval, a vaccine must reduce incidents of infection with the novel coronavirus by 50 percent compared to people who are not inoculated and demonstrate a high level of safety.

Experts say ongoing vaccine trials, which must enroll tens of thousands of people and wait for them to be exposed to the coronavirus, could produce usable results soon or as late as mid-2021, raising questions about drugmakers’ ability to meet the administration’s timelines.

Shares of Moderna have more than tripled since it announced in January it was developing a vaccine. Moderna has never produced an approved vaccine.

The United States, through its Operation Warp Speed vaccine development program, has set aside around $8 billion to lock in deals for COVID-19 vaccines in advance of any of them receiving approval from regulators.