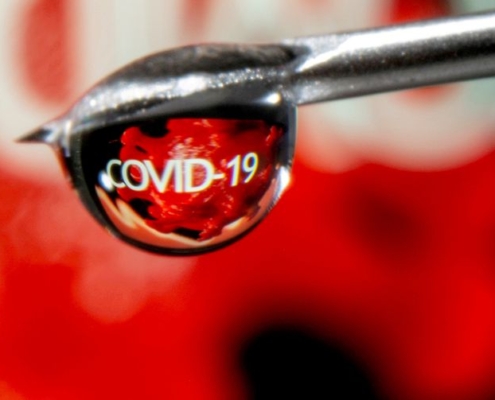 “Deltacron” with genes of Delta and Omicron found

Hybrid versions of the coronavirus that combine genes from the Delta and Omicron variants – dubbed “Deltacron” – have been identified in at least 17 patients in the United States and Europe, researchers said.

Because there have been so few confirmed cases, it is too soon to know whether Deltacron infections will be very transmissible or cause severe disease, said Philippe Colson of IHU Mediterranee Infection in Marseille, France, lead author of a report posted on Tuesday on medRxiv ahead of peer review. His team described three patients in France infected with a version of SARS-CoV-2 that combines the spike protein from an Omicron variant with the “body” of a Delta variant. Another two unrelated Deltacron infections have been identified in the United States, according to an unpublished report by genetics research company Helix that has been submitted to medRxiv and seen by Reuters. On virus research bulletin boards, other teams have reported an additional 12 Deltacron infections in Europe since January – all with an Omicron spike and a Delta body.

Genetic recombinations of human coronaviruses have been known to happen when two variants infect the same host cell. “During the SARS-CoV-2 pandemic, two or more variants have co-circulated during same periods of time and in same geographical areas… This created opportunities for recombination between these two variants,” said Colson, adding that his team has designed a PCR test that “can quickly test positive samples for the presence of this… virus.”

New research adds to evidence that trained dogs could help screen crowds to identify people infected with the coronavirus.

At two community screening centers in Paris, 335 volunteers getting traditional PCR tests also provided sweat samples. Overall, 78 people with symptoms and 31 people without symptoms tested positive by PCR. Given the sweat samples to smell, the dogs were 97% accurate at detecting the infected patients, and 100% accurate at detecting infection in the asymptomatic patients, according to a report posted on Tuesday on medRxiv ahead of peer review. They also were 91% accurate at identifying volunteers who were not infected, and 94% accurate at ruling out the infection in people without symptoms.

“Canine testing is non-invasive and provides immediate and reliable results,” the authors said. “Further studies will be focused on direct sniffing by dogs to evaluate sniffer dogs for mass pre-test in airports, harbors, railways stations, cultural activities or sporting events.”

The many coronavirus particles inside an infected person likely include some mutated ones that may turn out to be early examples of important variants, new findings suggest.

FILE PHOTO: The word “COVID-19” is reflected in a drop on a syringe needle in this illustration taken November 9, 2020. REUTERS/Dado Ruvic/Illustration/File Photo

Closely analyzing virus particles obtained from 10 people with infections attributed to the Alpha variant in Spain in April 2021, researchers identified some mutated particles resembling the Omicron variant, which was not formally identified until seven months later. They also found mutations characteristic of a form of Delta and Iota, according to a report published on Tuesday in the Journal of Clinical Investigation. While identifying an individual patient’s dominant variant may be sufficient for diagnostic purposes, the “ultra deep” genetic sequencing used in this study could help scientists track mutations in SARS-CoV-2 particles that might evolve into variants of concern, the researchers said.

“The virus that replicates in each infected patient is in reality a mixture of slightly different SARS-CoV-2 viruses,” and these different viruses account for varying proportions of the full “ensemble,” said coauthor Celia Perales of Universidad Autonoma de Madrid. Minority variants in one infected individual can become dominant in someone else, either by chance, or due to a selective advantage related to the presence or absence of drugs, vaccines, or other factors, she said.