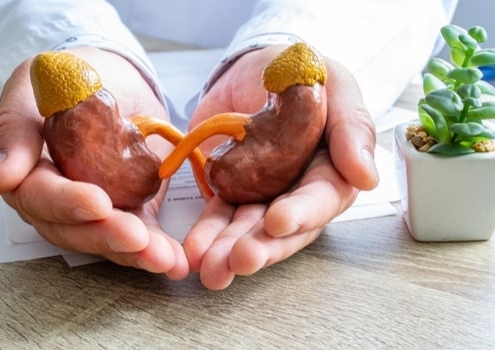 Hope could be on the way for families with children diagnosed with Primary Hyperoxaluria Type 1 (PH1), a rare disorder affecting the kidneys.

Alnylam Pharmaceuticals, a leader in RNAi therapeutics, presented the complete results from their ILLUMINATE-B Phase III study in children under six at the virtual American Society of Nephrology Kidney Week.

Their candidate, lumasiran, demonstrated a 72% reduction in urinary oxalate excretion, which is a metric for renal stone disease, along with a 44% improvement of nephrocalcinosis, the deposit of calcium oxalate and calcium phosphate in the kidneys.

Alnylam also showed sustained reduction in urinary oxalate excretion in their ILLUMINATE-A trial, which tested the efficacy of lumasiran in children over 6 and adults with PH1. In an open-label Phase II extension study, 94% of patients treated achieved normal or near-normal levels of urinary oxalate while their kidney function remained stable.

This is huge for patients and families experiencing the potentially fatal effects of PH1. About 19% of patients have a severe form of the disorder that becomes apparent within a few months after birth. Milder cases may not be diagnosed until 40-50 years of age, but most are diagnosed around 5-6 years. It’s estimated there are currently 2,500-5,000 cases of this ultra-rare disorder in the US and Europe.

PH1 is a rare metabolic disorder caused by an inherited mutation in a gene called AGXT. Both parents must pass the recessive gene, and they typically don’t know they’re carriers. The mutation causes an overproduction of oxalate, an end product of metabolism, by the liver. The excess oxalate then builds up in the kidneys, causing stones. The stones cause irreparable damage that can ultimately lead to kidney failure. The excess oxalate will also begin depositing in multiple vital organs including the eyes, bones, skin and heart causing other debilitating complications.

Most often, kidney stones are the first sign of hyperoxaluria, along with repeated urinary tract infections. As kidney stones are not uncommon in adults, the disorder often goes undiagnosed as symptoms are usually milder with only occasional or recurrent kidney stones. However, 20-50% of adults have advanced kidney disease or even end-stage renal disease by the time they’re diagnosed.

At this time, treatments for PH1 patients are seriously lacking. Many take pyridoxine, which is vitamin B6, to help reduce the body’s production of oxalate, but only 10-30% of PH patients respond. The other options remaining are dialysis and organ transplant. While a liver transplant removes the mutated gene from the body technically cures the disease, the patient then lives with the lifelong complications of an organ transplant patient, along with the remaining buildup of oxalate throughout the rest of the body.

BioSpace spoke with mother and PH1 social media advocate Kristi Ouimet who is very hopeful for the FDA approval of lumasiran. Ouimet has three children, two of which have PH1. Her daughter who was diagnosed at 6 is now 17 and facing dialysis with the possibility of a liver and kidney transplant. However, the FDA granted the family a “compassion use” of one of the drugs currently in trial with positive results. They’ve decided at this time to wait on the transplant, and even turned down the match on August 31st in hopes the medication will continue to prove effective. So far, the treatment has brought the teen’s dialysis needs from 6 days a week down to 3. If it continues to be effective, she may be able to avoid transplant altogether.

Ouimet’s 6-year-old already faced a liver and kidney transplant at age 2.5 after going into kidney failure at just 5 months old. The disorder left his remaining kidney scarred and the symptoms of that damage are increasing to the point where they’re now looking for a match for him to get the second kidney transplant.

Ouimet’s experiences have been a roller coaster of fear and uncertainty, but that hasn’t left the warrior-mom with a dampened spirit. She said she realized when her son was lying in the hospital after his transplant that, “when I feel helpless, I have to do something.  What can I do? I learned to be an advocate. I’m no expert, but I’ve gone through a lot of things. Every voice is important to be heard. There’s a lot of determination and defiance that comes with this type of thing. Because you can’t just give up. It’s our wonderful obligation. This is where we were meant to be,” Ouimet said.

Regarding the promising treatments in the pipeline, she said, “It’s such a good feeling to know that in the future when somebody gets that news of a diagnosis, that it can be treated with a medication. That they won’t have to go through all this experience [of transplants and dialysis] because of all that we have been through. We are the stepping stones to a cure.”