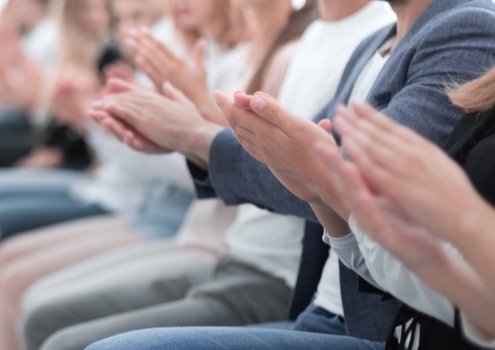 For nearly 30 years, Richard Miller has been at the forefront of developing treatments for lymphomas, most notably the multi-billion dollar breakthroughs Rituxan and Imbruvica. In recognition of his decades of work, Miller was awarded with the 2020 Drug Hunter Award.

Now in its third year, the award was presented by the UC Drug Discovery Consortium. Miller was preceded in receiving the award by Stephen Kaldor, who was responsible for breakthroughs in HIV protease inhibitors and Richard Heyman, who blazed a trail with androgen receptor degraders for prostate cancers.

Miller has had a long history in the medical field as well as the pharmaceutical industry. He is a trained physician specializing in oncology and internal medicine. Although today he helms Corvus Pharmaceuticals, Inc. , he still spends one day per week serving patients from his lymphoma clinic at Stanford University. It was at IDEC, a company that merged with Biogen, where Miller developed Rituxan (rituximab), a CD20-directed cytolytic antibody indicated for the treatment of patients with non-Hodgkin’s lymphoma, chronic lymphocytic leukemia, rheumatoid arthritis, granulomatosis with polyangiitis, microscopic polyangiitis and pemphigus vulgaris. Rituxan was the first monoclonal antibody for cancer approved and is now owned by Genentech.

“Rituxan changed medicine, not just cancer,” Miller told BioSpace in an interview. He called it a pivotal product for the industry. Once it had been approved by the U.S. Food and Drug Administration in 1997, he said big pharmaceutical companies took notice and realized that “you can make money with these monoclonal antibodies.” It showed the industry that the antibodies could be “big time,” he added.

Rituxan was later followed in approval by Herceptin and for years, those were the only two drugs of their kind on the market, he said. Now, there are more than 100 approved therapeutic antibodies in the United States. Those initial approves were difficult to secure and commercialize, Miller said, but it “created a momentum for the industry.”

Following IDEC, Miller went on to co-found and helm Pharmacyclics, where he led the initial discovery and development efforts for Imbruvica (ibrutinib). Imbruvica is a covalent BTK inhibitor, now used for treatment of several types of B cell lymphomas. From a development standpoint, Imbruvica, which is now owned by Janssen, was unique in that it was the first cancer drug that worked by covalent bond. At the time of development, Miller said that kind of drug was thought to be dangerous, but they were able to take advantage of this covalent nature to enhance efficacy and safety.

“In my career, I’ve had the privilege of working on some important compounds,” Miller said.

He noted that his career track has been somewhat special as there are few researchers who can successfully work on both antibodies and small molecules. He likened it to being both a concert pianist and violinist. Because his work was focused on B cells, which he called a common denominator, Miller said he was able to apply that to making a drug intervene in these diseases.

“When you understand the diseases, you have a big advantage in understanding the drugs and biologics that differentiate it,” Miller said.

Over the course of his career, Miller said he has seen significant improvements in clinical design, laboratory testing and other advancements in drug design. He also pointed to improvements at the FDA regarding a “deeper scientific understanding” of the products that come up for approval and added that the regulatory agency is more accepting of adaptive clinical designs.

While there have been extraordinary improvements in the treatment of cancer, Miller said there are still significant needs with some of the most common cancers, particularly when they have gone metastatic, such as colon cancer.

“There’s need for some better therapies,” he said.

And at Corvus, that’s what Miller is hoping to do with his company’s pipeline, which includes a small molecule ITK inhibitor and an anti-CD73 antibody. The company also has an A2A receptor antagonist of adenosine in its pipeline. The company continues to present updated clinical data from each of these programs in order to provide a long-term look at the assets, not just momentary snapshots of activity.

“Time is an important variable here. A lot of people can look good for one day, but you want to sustain excellence over an extended period of time,” Miller said.

J&J Says HIV Drug Darunavir Hasn’t Been Proven to be Effective for COVID-19...
Scroll to top