(Reuters) – Pfizer Inc (PFE.N) and its German partner BioNTech SE (22UAy.DE) on Tuesday filed an application with U.S. regulators seeking emergency use authorization for a second booster shot of their COVID-19 vaccine for people aged 65 and older.

The submission to the U.S. Food and Drug Administration includes data collected in Israel, where a second booster is authorized for many people over age 18. read more

An analysis of data from over a million adults 60 years and older showed rates of confirmed infections and severe illness were lower among individuals who received an additional booster dose of the vaccine administered at least four months after an initial booster (third) dose compared to those who received only one booster dose, the companies said.

The news was first reported by the Washington Post earlier on Tuesday.

U.S. health officials including top infectious disease expert Dr. Anthony Fauci have raised the prospects of a fourth shot many times, suggesting one might be needed for older people and to prepare for the possibility of another surge of cases.

U.S. Centers for Disease Control and Prevention data has shown that vaccine efficacy wanes over time and that third shots help restore that efficacy, but it has not released comprehensive data based on age or health status.

Pfizer Chief Executive Albert Bourla has several times in the past week told reporters that a fourth dose of the vaccine will be needed to offset waning protection gained with the third shot.

He told the Washington Post last week that data suggests a fourth dose dramatically improves protection against the dominant Omicron variant of the virus compared to the third dose after three-to-six months.

That analysis was more favorable than a small study of Israeli healthcare workers. When given at least four months after the third shot, a fourth dose was 30% effective against infection for the Pfizer-BioNTech vaccine and 11% for the Moderna Inc (MRNA.O) vaccine.

“The elderly and immunocompromised are the groups that would benefit the most from additional boost,” said Dan Barouch, a Harvard vaccine researcher. “I think the data is supportive, but the benefits appear to be relatively small.”

Pfizer is looking at how a fourth dose performs in its own study of about 600 people. It and Moderna are betting additional booster doses will be needed for new virus variants that emerge. read more

While COVID cases are in retreat in the United State and much of the world, infections are rising in China as the Omicron variant spreads. In the UK and Europe, there has been a reversal in the downward trend of COVID cases as economies have opened up and a second version of Omicron circulates. 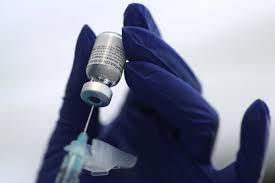 Pfizer last month said eventual 2022 sales of its COVID-19 vaccine may not top its current forecast of $32 billion, a 13% decline from 2021 levels. read more

Separately, the FDA plans to convene its expert advisory panel in early April to consider whether there should be an October or November campaign to encourage some or all adults to get additional boosters, and whether the shots should be the same as current vaccines or be retooled to counter new variants, the Washington Post reported, citing a federal official.