(Reuters) – The total number of people hospitalized in New York fell for the first time since the onset of the coronavirus outbreak, a further sign the state at the epicenter may be at the peak of its crisis, Governor Andrew Cuomo said on Tuesday. 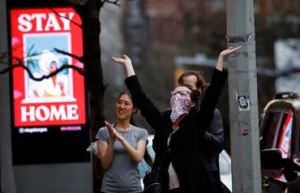 He told a daily briefing that President Donald Trump had inaccurately asserted the president had total authority over when states reopen schools and businesses but added that he did not want, or have the time, to fight with Trump.

Cuomo said that a total of 18,697 people were hospitalized across New York, down from 18,825 a day earlier and the first tick lower since the crisis began. Patients newly admitted to the hospital for COVID-19, the respiratory illness caused by the coronavirus, came to about 1,600 on Monday, down by more than 300 people compared to the day before.

“We think we are at the apex on the plateau,” Cuomo said, though he cautioned that the decline, while part of a flattening trend over the past week or so, was statistically insignificant and warned against relaxing stay-at-home orders too quickly.

“We could lose all the progress we made in one week,” he said.

Cuomo said an additional 778 New Yorkers died on Monday, up from 671 a day earlier, which had marked the lowest daily death count since April 5. A total of 10,834 New York residents have died due to COVID-19, nearly half the total across the country.

On Monday, Cuomo said he was teaming up with neighboring states Connecticut, Delaware, Massachusetts, New Jersey, Pennsylvania and Rhode Island to devise strategies for easing stay-at-home orders, an action that appeared to upset Trump.

At a briefing on Monday, Trump had said he had total authority over when businesses and schools would reopen, a declaration that was immediately challenged by a number of governors on U.S. Constitutional grounds.

“The president is clearly spoiling for a fight on this issue,” said Cuomo, who had appeared on TV multiple times since Trump’s comments to push back on them. “The president will have no fight with me. I will not engage in it.”

Cuomo reiterated that he believed rapid, mass testing would be critical to getting people back to work and called on the Federal Emergency Management Agency to take the lead in procuring tests.

He said he wanted to avoid repeating what had happened in the scramble to secure personal protective equipment, with states competing against one another and at times with the federal government, bidding up prices.

Reporting by Nathan Layne in Wilton, Connecticut and Maria Caspani and Jessica Resnick-Ault in New York; Editing by Chizu Nomiyama and Howard Goller