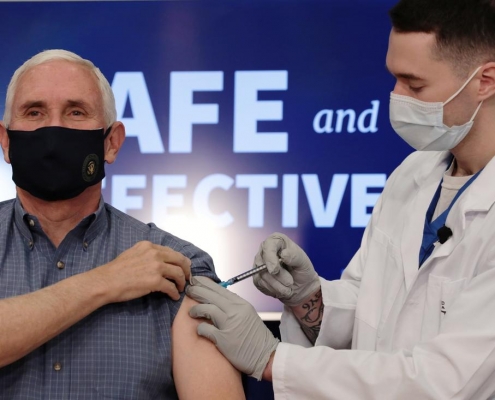 WASHINGTON (Reuters) – U.S. Vice President Mike Pence received his COVID-19 vaccine live on television on Friday, seeking to shore up public support for vaccinations after U.S. deaths from the coronavirus topped 3,000 for a third straight day.

Pence, his wife Karen Pence, and Surgeon General Jerome Adams each rolled up their sleeves and took injections from medical staff in white coats, becoming the highest-profile recipients to receive the vaccine publicly.

They were injected with the vaccine developed by Pfizer Inc and German partner BioNTech SE that the Food and Drug Administration authorized for emergency use a week ago.

The FDA on Friday was expected to approve a second vaccine for emergency use, this one from Moderna Inc.

After answering routine questions about their health, the three of them took their injections in the Old Executive Office Building on the White House campus, seated in front of a blue curtain and screens that declared, “Safe and Effective” and “Operation Warp Speed.”

They could be followed by a parade of political leaders, part of a campaign to overcome public skepticism about the safety of vaccines, which underwent large-scale clinical trials and scientific review.

Former presidents Bill Clinton, George W. Bush and Barack Obama have volunteered for public inoculations, and President-elect Joe Biden, who is due to take office on Jan. 20, will get his next week, his aides said.

U.S. infectious disease expert Anthony Fauci, tapped to be Biden’s chief medical adviser, said he would get vaccinated as soon as he could and was waiting for doses to arrive at the National Institutes of Health (NIH).

“I hope that’s going to be within the next few days,” Fauci said told NBC’s “Today” show on Friday.

While departing President Donald Trump has yet to embrace messages about social distancing and mask-wearing, he has encouraged people to get vaccinated and championed his administration’s Operation Warp Speed program to promote the development and distribution of vaccines. 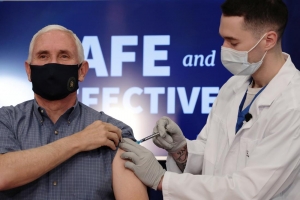 But Trump, who survived a bout with COVID-19 a few weeks before losing the Nov. 3 election to Biden, has yet to announce his plans for getting a shot.

Trump in a tweet ahead of the vaccine event said that Moderna’s vaccine had been approved and was shipping immediately, although the FDA has not yet publicly announced a decision. Pence said at the White House event that approval was expected within hours.

Health and Human Services Secretary Alex Azar told CNBC on Thursday that 5.9 million Moderna vaccine doses had been allotted for state governments and were ready to distribute nationwide starting this weekend.

Both vaccines require two doses, given three or four weeks apart, for each person inoculated.

The United States reported a record 239,903 new cases on Thursday, raising the cumulative number above 17 million since the coronavirus pandemic began nearly a year ago.

Health experts have warned of a deepening crisis this winter as intensive care units (ICUs) fill up and hospital beds spill over into hallways. U.S. hospitalizations have set a new record on each of the past 20 days, approaching 114,000 on Thursday, according to a Reuters tally.

FDA Approves Xpovio for Multiple Myeloma Patients After At Least One Prior ...
Scroll to top